It's Fall and it's time for my How to Make a Pumpkin Roll Video!  I recently had a friend ask for this recipe, and I thought it was about time I shared this recipe on the blog again.  Whether you've got Thanksgiving ahead of you in the USA or you're just enjoying the aftermath of it in Canada, it's a great time for Pumpkin Roll!
Years ago, I posted at HowDoesShe about the Pumpkin Roll recipe that I use that seems to be a hit everywhere I've taken it.

Since then I've had several people say that even with all of the photos in the tutorial, they're hesitant to try it. A friend of mine mentioned that a video tutorial might be helpful, so last time I made the pumpkin roll I had Ken video tape the process for me and I squished it into a 5 minute video. 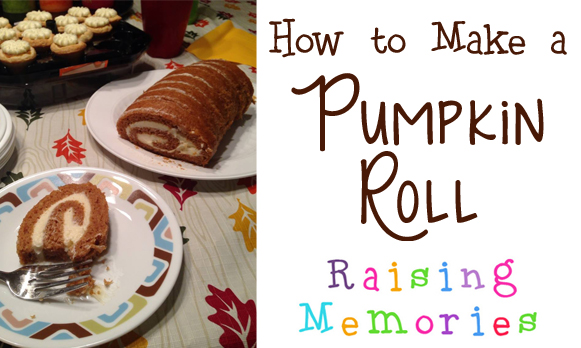 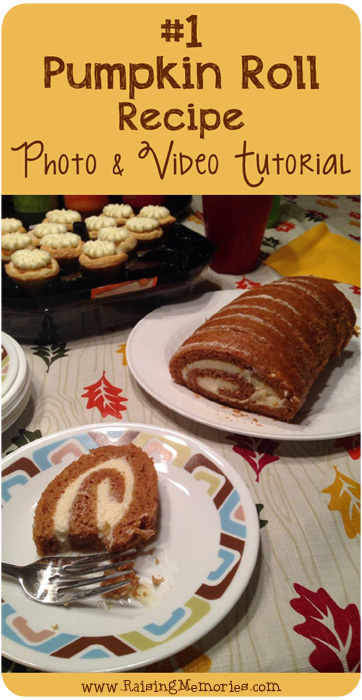 I'll add in the photo tutorial as well, as it has all of the instructions whereas the video mostly shows you how to do it (so scroll to the bottom of this post for the video!) 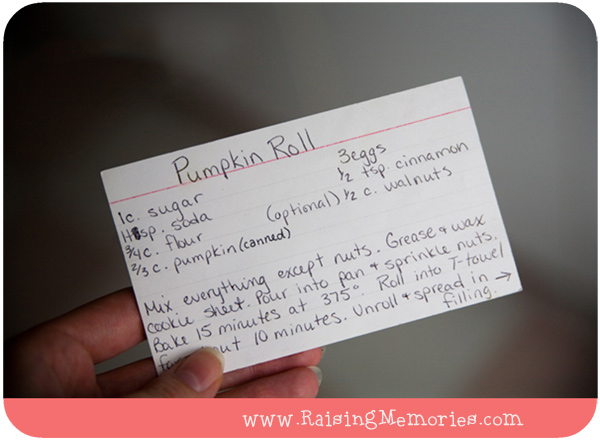 Here are the photos & description: 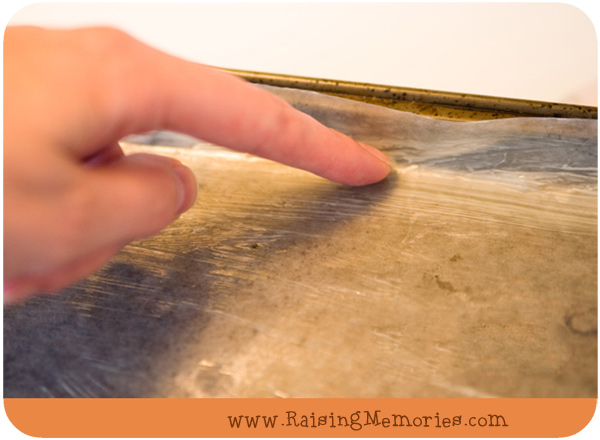 Above is a photo of the grease & wax part (wax paper first, then grease).
I crease the wax paper around the edges so that it stays in place better, like this: 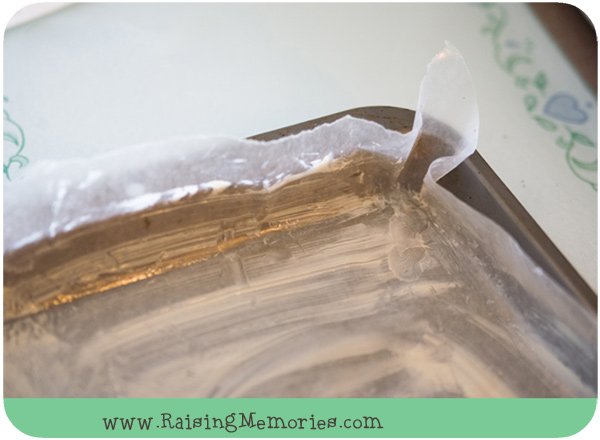 (which helps the shape of the cake-ish part of the roll)... also, grease it really really well (it's not cool when the cake won't come off of the wax paper). 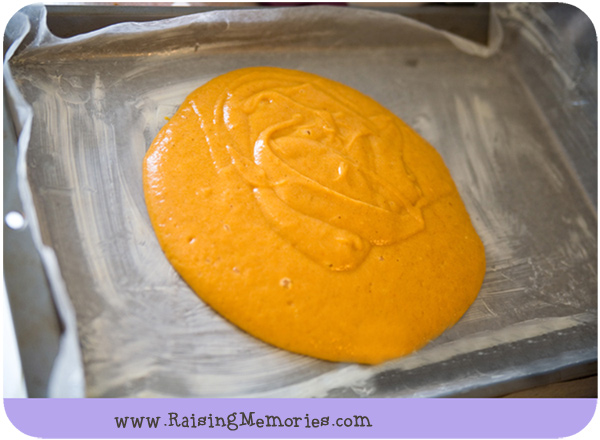 Now pour your mixture onto the pan & smooth it out so that it fills the pan like so: 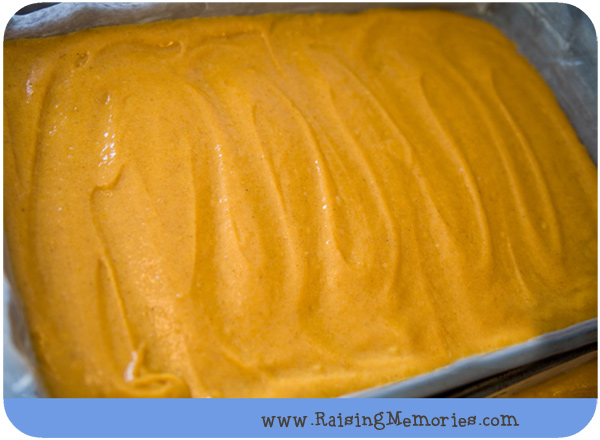 ...and you're ready for baking. Keep an eye on it near the end of the baking time- you want it a bit brown- if it turns black... you've gone too far! 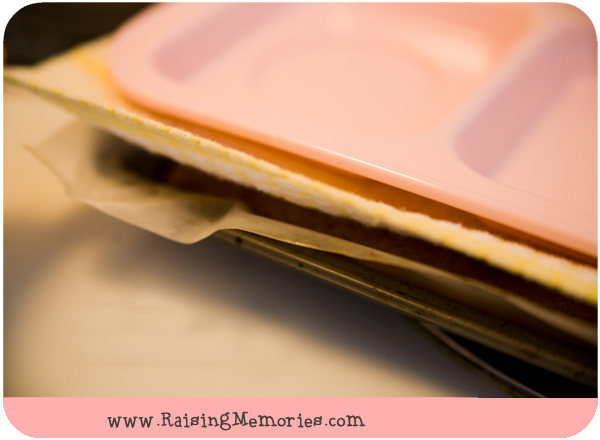 Once you've got it out of the oven, you're at the flip stage. I usually put the pan down first, then a tea towel, then an upside down pan. (I was using my other pan this time, so I used a lunch tray- but you get the idea). Grab hold of the whole thing (with oven mitts on!) and flip it over onto the cool tray. 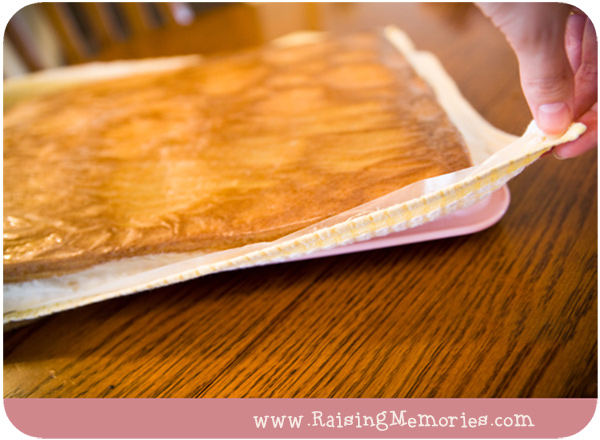 Congratulations, you pulled off the flip! (are you still with me?) I threw the above picture in for you in case it helps illustrate the order of things (I've now removed the pan I cooked it in, and we're ready to remove the wax paper). 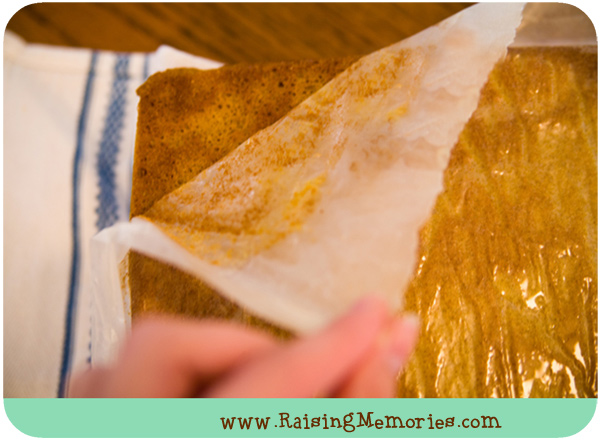 Carefully pull the wax paper away- you really don't want your cake to stick to the wax paper or start to come apart- this part is really important (that's why I wanted you to grease your wax paper really well).

...oh, and now you know what my other pan was busy doing (did you notice the tea towel switch?)
I was making 2 rolls when I photographed this (you only need one tea towel ;) ). 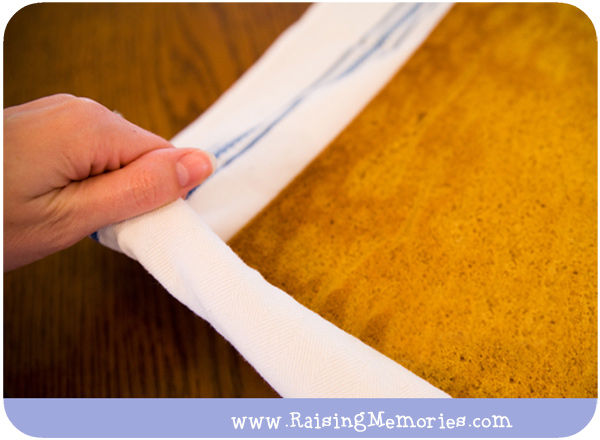 Next you're going to roll up the end of your tea towel (as shown above) and then continue rolling- with the cake and the tea towel. Do this carefully- the cake can crack at this stage if you're not gentle with it. 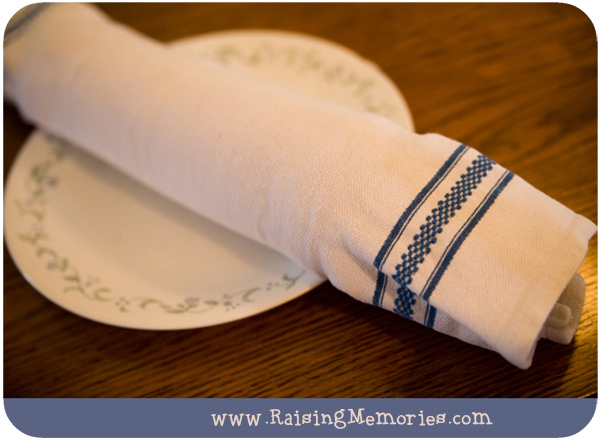 Leave your roll sitting like that for 10 minutes so that it'll cool before you spread your filling in. You can mix your filling during this time. 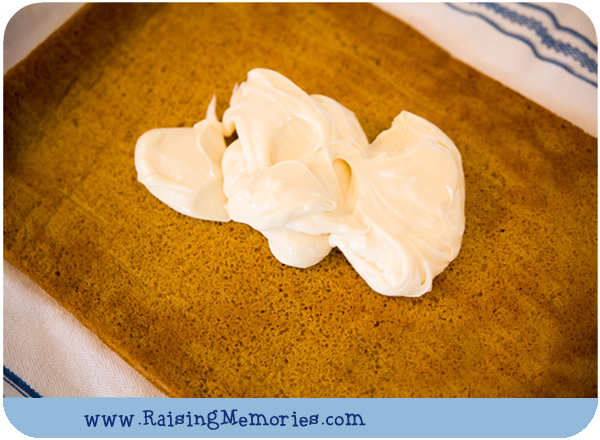 Unroll (careful that the cake doesn't stick to the tea towel & get pulled apart). Plop the filling on top. 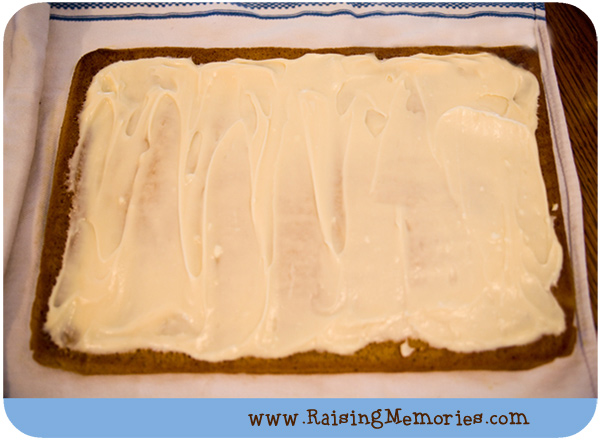 Spread it around- almost to the edges, but you don't have to quite go all the way or it'll just goosh out when you roll it again. 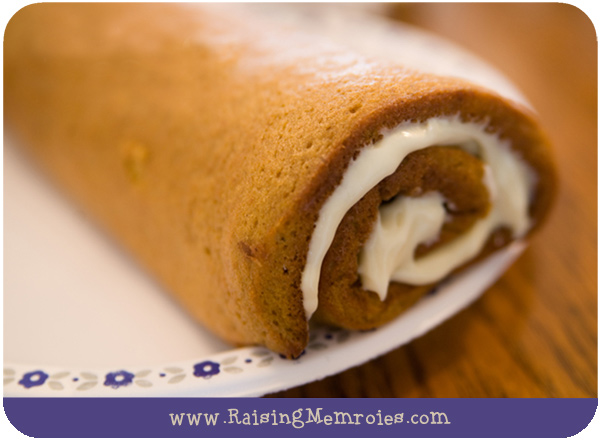 
If you want to make this, be sure to pin this post for reference when you do!


"Cinnabon" Cinnamon Roll  tutorial- click here to check it out! 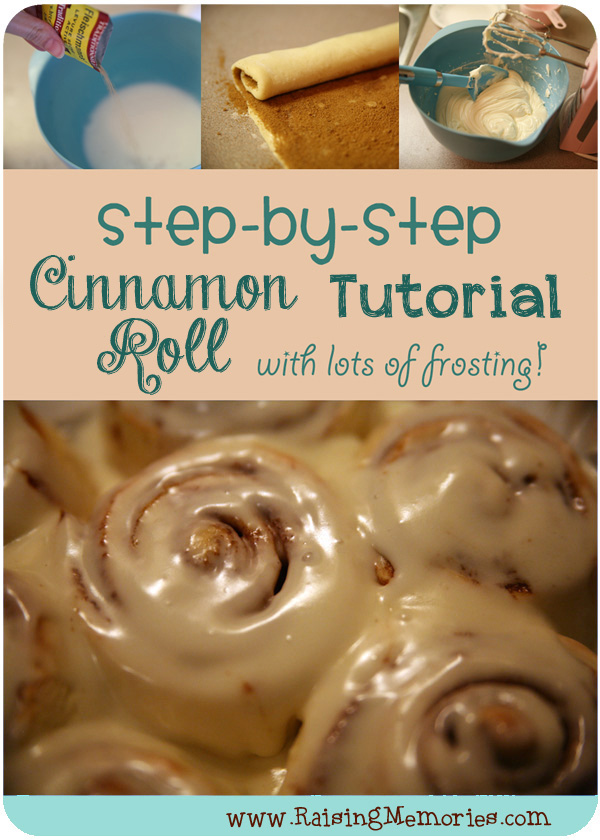