The Dyson Cool Fan Competes in the Fan Olympics!

The Dyson Cool Fan Competes in the Fan Olympics!

We live in a home without central air conditioning, so we have to get by during the hot days of summer with just two window air conditioners and some strategically placed fans. We often worry about our kids being cool enough in their bedroom on hot nights! Until recently, we had been making due with a couple of (very awkward) standing fans and a table-top fan. They are SO in the way and I'm always stubbing my toes on them or trying to move them, only to have the top come off of the base. I was getting SO tired of the situation!  This summer we had the opportunity to compare a Dyson Cool Fan with our regular blade fans and it couldn't have come at a better time! We decided to make the comparison process into a fun event... 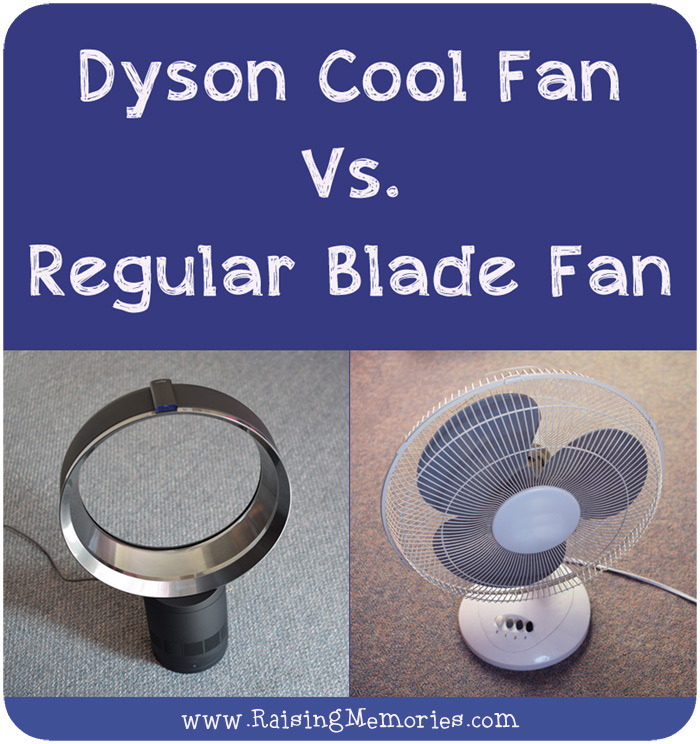 We're in the Olympic zone at our house right now, so we did some "Fan Olympics", putting our regular blade fan into competition with the 12" Dyson Cool Fan.

Our original blade fan was already assembled so I couldn't officially time this event, but I can tell you from memory that the blade fan took a lot more effort to assemble than the Dyson Cool Fan did! It also came with more parts.

Straight out of the box, the Dyson Cool Fan had a base, a remote, and the round fan itself.
The blade fan had two base parts, 2 grille parts, blades, and a couple of screw-on pieces to hold them in place. 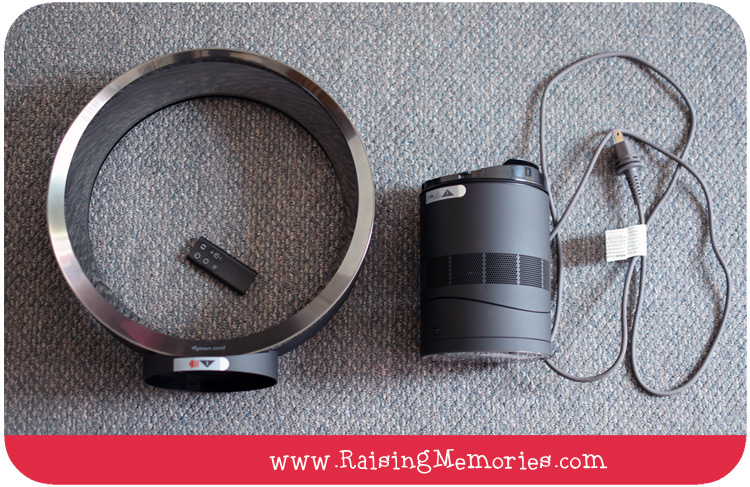 To assemble the Dyson Cool Fan, you just place the circular piece on top of the base, twist it to lock it in place, then remove the sticker guides. I considered making a video for you to show you the assembly process for this fan... until I saw what the assembly process was. It took a few seconds (no video needed)!

To assemble the blade fan, we had to attach the neck to the base, place the rear grid on the neck followed by the blades onto the grid and screw all of those together. Then the front grid needed to be attached to the rear grid by clamping them together in 4 places.

Winner of this round: Dyson!

For this event, we set the fans side by side. We turned one on and held a strip of paper up in the path of the airflow and moved further and further away from the fan until the paper hung straight down and we couldn't see any evidence that it was being affected by the fan.

We measured the distance for each with a measuring tape (just like long jump). We measured the regular blade fan's airflow at 105 inches. The Dyson Cool Fan blew it away with an extra 90 inches on top of that, coming in at 195 inches!

We could see that the Cool Fan had an advantage with the way it was built when it would come to dusting, but we wanted to give the Blade Fan a chance, so we set our stop watches and I went to work cleaning each of them.

The Blade Fan required disassembly, dusting and reassembly so it took a full 3 minutes from start to finish AND I sustained a finger injury while trying to open it up! Throughout the whole process, dust was flying everywhere- definitely a deduction from this judge (I'm allergic to dust). 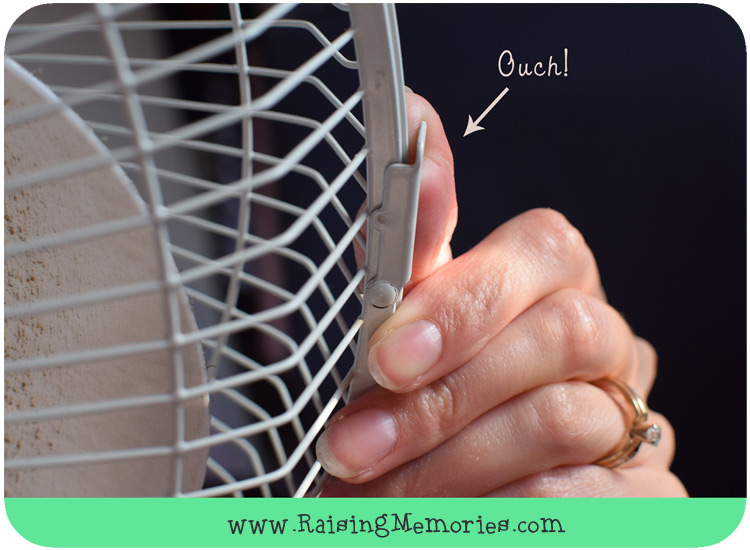 With a microfiber cloth in hand, from start to finish, the Cool Fan was finished in 10 seconds. No contest!

Okay, so this isn't so much an event where we measured performance, but it is a comparison that I thought was important.

I measured around the circumference of the base and the main circular fan part of each of the fans and these are the results:

The Dyson fan definitely takes up less room!
These measurements are for the 12" model. There is also a 10" model available.

After all of the events, it's clear that the Dyson Cool Fan would win the gold medal in our Fan Olympics! It's lightweight and quiet, easy to assemble and clean, but most importantly, it's nearly twice as strong! 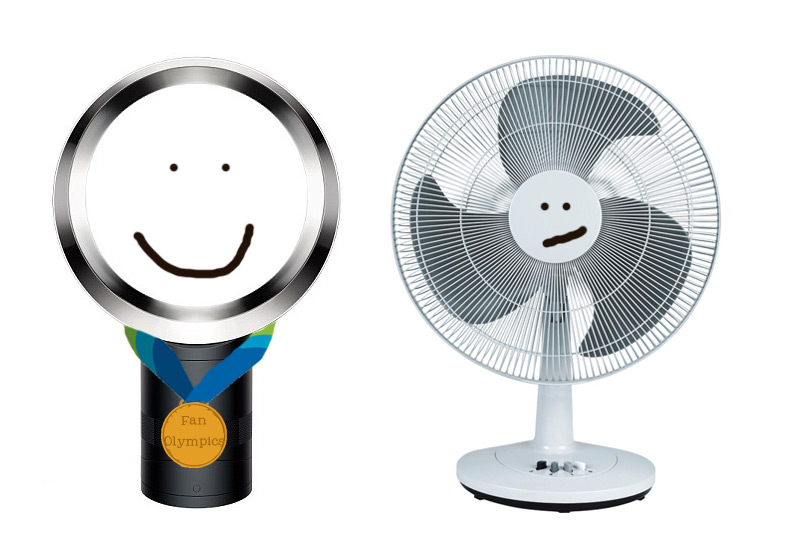 A couple of other "cool" things I wanted to share with you about the Dyson Cool Fan:

Several years ago my little nephew put his hand through the"protective" grid of a blade fan while visiting Canada from the U.S.  His poor little fingers were hurt pretty badly and soon after that, my mother-in-law went out and discovered Dyson's bladeless fans. Not only do they look unique with that hole in the middle, but they are totally safe for kids because there's no chance that their fingers could get hurt!

The Dyson Cool Fan comes with a remote that allows you to turn the fan on & off, control oscillation and switch between 10 different airflow settings. It also has a sleep timer that can program your fan to turn off after preset intervals that range from 15 minutes to 9 hours. 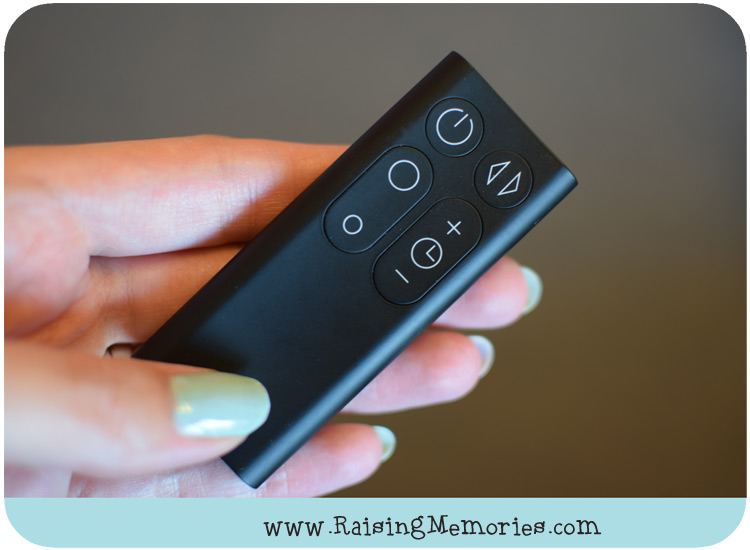 A very handy feature is that the remote control is curved and magnetized so that it can store neatly on the top of the fan- I love this! 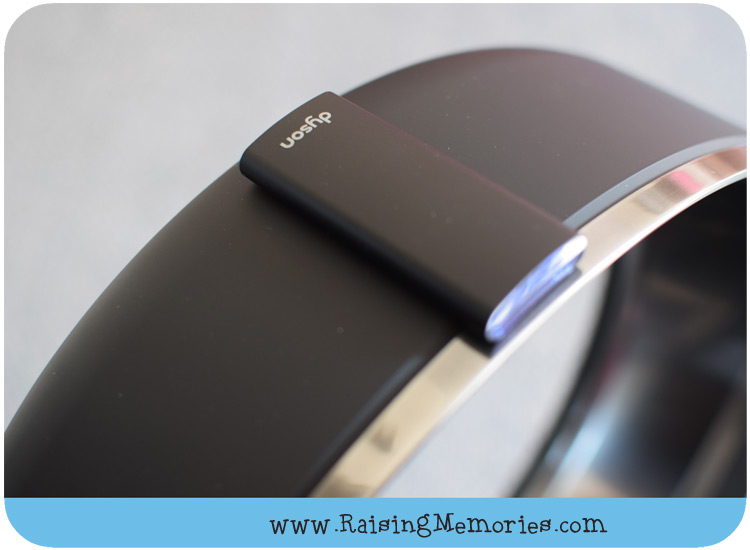 Dyson Cool fans have been built to be quieter while maintaining airflow. They've built the fans so that they create less turbulence (therefore less noise, and less choppy air)!

The fan pivots on its own centre of gravity so you can tilt it up or down and it stays put without having to clamp it in any way. 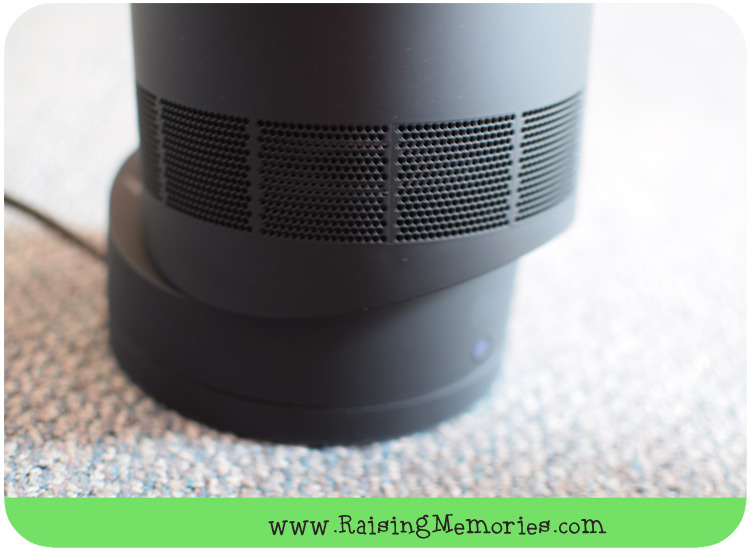 Overall, I am very impressed with the Dyson Cool Fan. I honestly cannot come up with one area that it didn't outperform a regular fan except for price. Of course we would always like to spend less, but there are times when quality and performance justify a higher price. Just as I was with our vacuum, I continue to be impressed and amazed by the company's innovation and quality. There is a lot of work put into research and development for Dyson's products- their machines are build to last and to outperform their competitors.

Disclosure: I was not financially compensated for this post. I received product to facilitate this review. All opinions shared are my own.