Allow me to take you back into my journal for a few snippets from early March- specifically, the first 2 weeks of isolating at home, due to the pandemic of 2020! 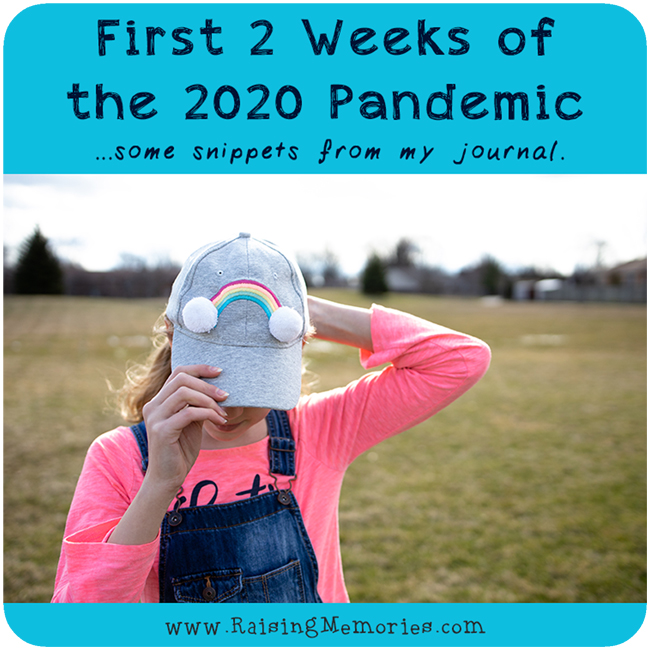 The World Health Organization declared the Coronavirus outbreak a pandemic.

Ontario announced that after March break week (which would start the following week), elementary & secondary schools would be closed for 2 additional weeks.

We went shopping in the evening. That was the last time I saw toilet paper in a store for a while!

While we were in the store, Ken made a comment about going to a grocery store (because there was something we wanted that Shoppers didn't carry). Another shopper overheard & said, "Oh, you don't want to go to the grocery store- the grocery stores are INSANE!"

Later that night, someone shared a video of a grocery store in our city from that night. The line of carts waiting to checkout went all around the (large) grocery store- it was SOOO bizarre!!

Entry to Canada for non citizens/permanent residents denied. Prime Minister announced, "let me be clear: if you're abroad, it's time for you to come home." and "all Canadians, as much as possible, should stay home." 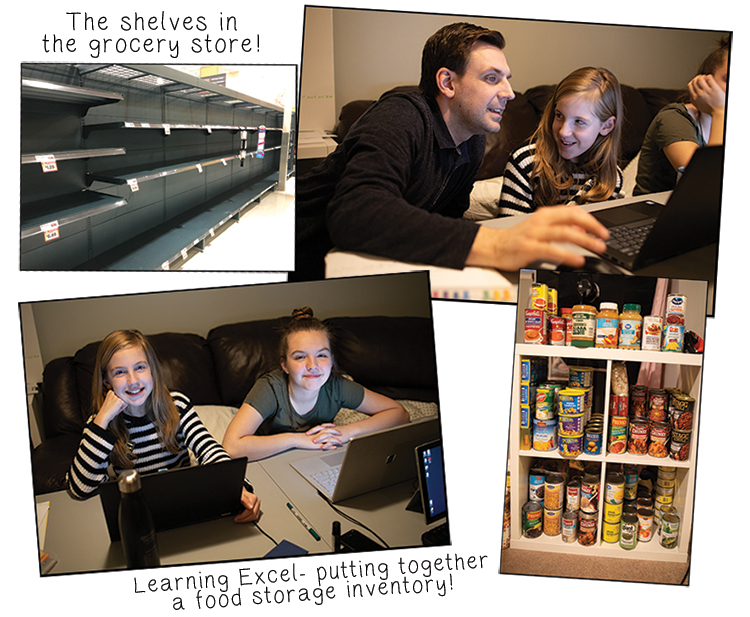 After stocking up on some non-perishables, Ken decided it was a good opportunity to teach the girls how to use Excel. They set up a spreadsheet to keep track of the food storage. They did a great job, but we didn't keep up with it and don't use it anymore. It was a nice idea, but turned out not to be so practical to keep up to date!

State of Emergency was declared in Ontario. Restaurants, libraries, theatres, etc. will be closed.

I got laid off.

Borders between US & Canada closing for nonessential travel.

All of our March Break plans were cancelled, so we tried to keep things fun and semi-normal by doing things like going for bike rides and little walks during the days. It was weird to not know what was going to happen next- there would be major news every day! 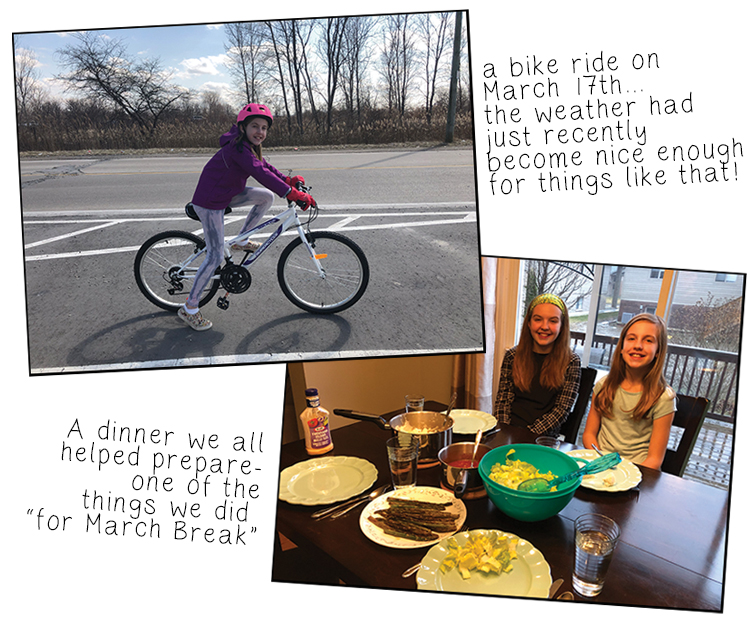 While cooking meals, I would wonder to myself whether we would even be able to continue having fresh food for long- would we soon be in lock-down like they were in some parts of Europe? Would fresh food even continue to be readily available? Suddenly we were extra appreciative of the food we had available to us!

I remember feeling that we needed to think of something to do, to get out of the house and have some fun. We weren't even sure if it was "okay" to go to the park! In the end, we decided that if we didn't touch any park equipment, we were pretty sure it was allowed. It was so bizarre to not know for sure, and it felt like a ghost town outside! 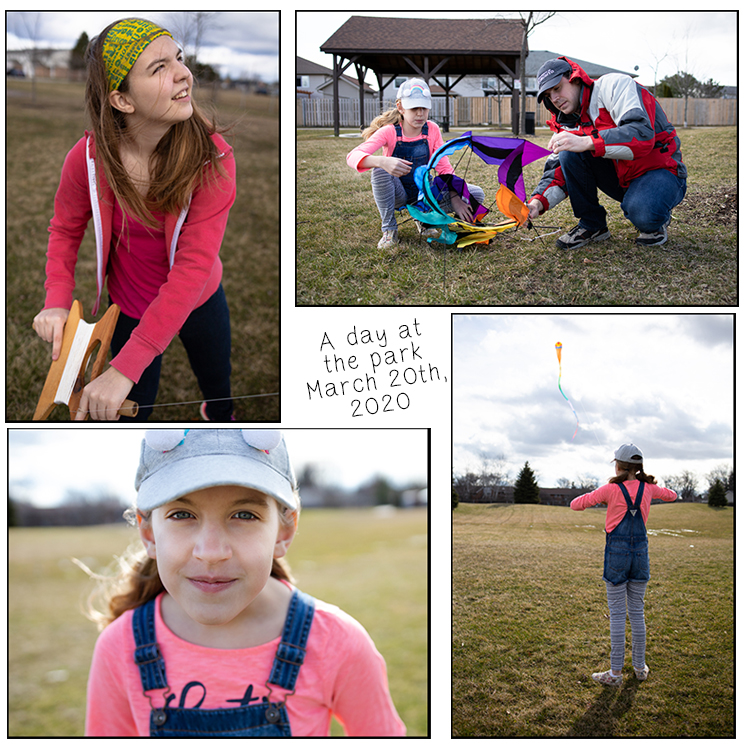 We went for family walks as many days as we could. Ken was often busy working from home, and had begun having some bouts of Vertigo, so he wasn't always able to join us. I remember this particular walk and how he had to stop and wait for us to finish the last loop because he felt so dizzy.

We went out for a bike ride, armed with sidewalk chalk, and stopped a couple of times to leave encouraging, positive messages throughout the neighbourhood. 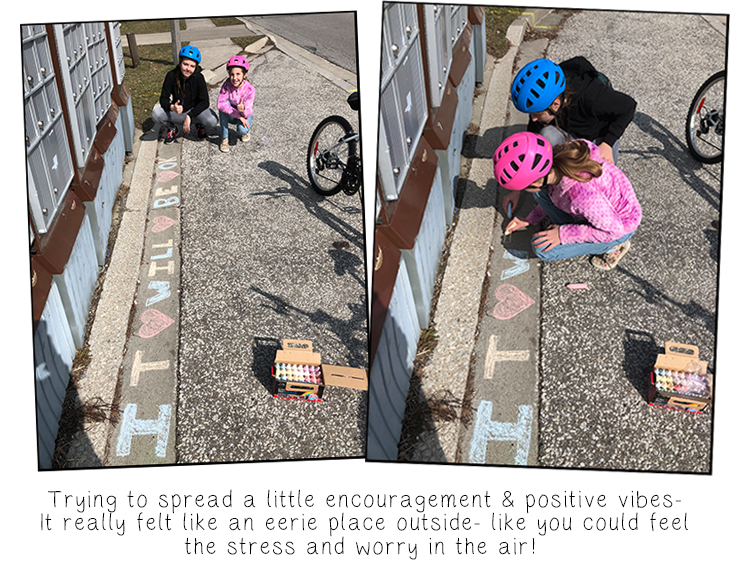 We had our first youth activity that day- a virtual photo scavenger hunt. The girls each grabbed a phone & ran around their homes to find things & take photos with them. Little did we know that we'd still be having virtual activities months later!


That whole first couple of weeks was so weird- I went back & forth between feelings of overwhelm, then happiness, then overwhelm/exhaustion and learning how to balance checking the news with just enjoying the present, in our own little world in our own little home!


Do you remember what your first 2 weeks in "quarantine" were like?
Did you write any of it down?