Finances are important, but they can get complicated, and it's easy to get frustrated with all the math and feel like giving up! Considering my recent posts about RESPs, today I want to explain some things about compound interest. If you're not familiar with compound interest or how it works then this post is for you! I'm going to tell you what it is, show you how it works, and demonstrate why it makes a big difference to your investment if you start saving as soon as possible! 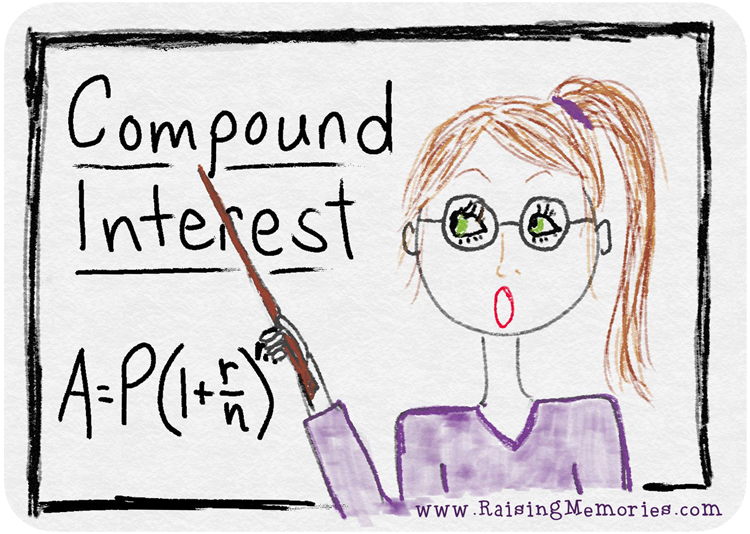 What Is Compound Interest?

Simply stated, compound interest means that your interest earns interest. By investing early, you could get a lot more return for the money you invest when you start (your principal investment) than you would with non-compound interest (this is called simple interest).

The green column shows what would happen with compound interest and the orange column shows what would happen with simple interest. Both columns start out with the same principal (starting) investment of $1,000 (shown in purple text). Each row shows another year of time that your $1,000 is invested and the dollar amount goes up as much as it would if you were earning 6% interest each year.

If you look at the final row (Year 16), you can see that the compound interest earned on the principal amount of $1,000 (at this interest rate) by the 16th year is a lot higher than the simple interest earned in the same amount of time!

As you can see from the final row of this chart (Year 18), you would earn a lot more on your $1,000 if you had set it aside years earlier, than you would if you set that same amount aside eight years later. I hope this helps you to see why starting earlier is better with RESPs! That said, don't despair if you're feeling like you're late to the party. After all, even in our example you get a free $791 on your $1,000 investment after eight years instead of nothing! The important thing I want you to realize is that the best time to start is now!

Of course, with an RESP, you can continue to add to your investment each year, which will increase your earnings even more. You can also benefit from government grants and incentives (I'll share more about those in a future post), but I wanted to show you a basic example of how compound interest works in your favour!

Heritage Education Funds is one of the leading RESP dealers in Canada.You can learn more about them–as well as about RESPs in general–by visiting their site.

I've written a few previous posts about education savings plans on the blog. If you missed them and want to take a look, you can find them here:

Disclosure: This post was sponsored by Heritage Education Funds. All opinions shared are my own.