It's time for another installment of the Smoke Saga. If you're following my Instagram Stories, you know that we were busy last week, visiting Utah to find ourselves a place to live when we move. Now that we're back, we have one week to pack and then start the drive out there! I found a few minutes yesterday to get this 4th "Smoke Saga" post completed- it's all about what we did during the 3rd week of dealing with the smoke damage. 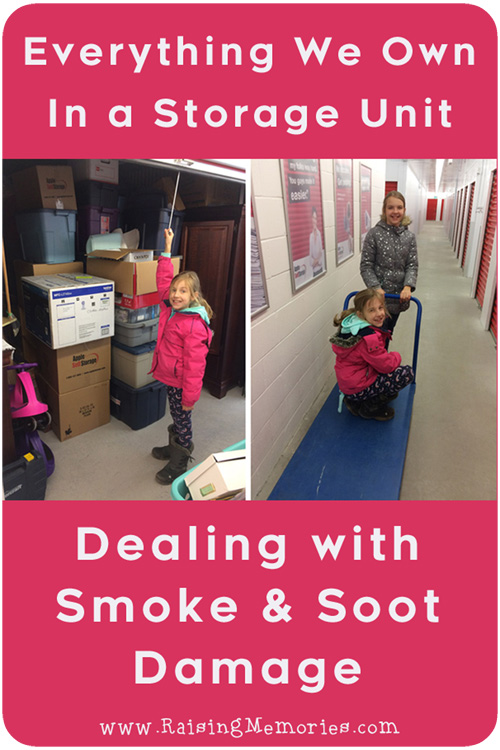 It was the last full week of Ken being home, before he headed out to Utah to see if the job he was looking into was what he wanted to pursue. Here's how it all went down...

On Saturday my parents came into town to pick up our kids and do something fun with them during the day while we worked to get almost everything out of our house, with the help of some amazing friends who dropped everything for the day and stayed in the trenches with us!

This day we gave in and decided there was no saving our leather reclining couches and, based on the advice we had received from several restorers, we put them and our kitchen table & chairs out on the lawn for garbage pick up. 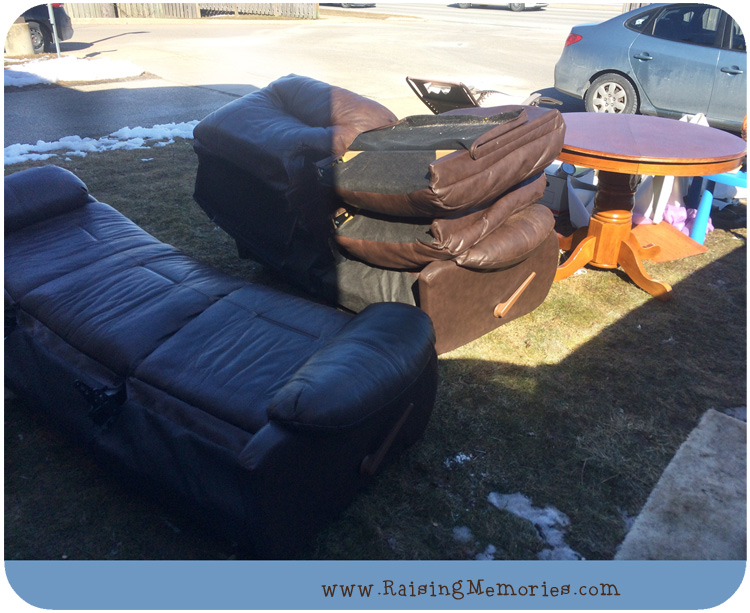 At the end of the day, we had almost everything out of the house! Ken & I drove to my parents' house to sleep over there with the girls. We had a comical stop to buy pillows for ourselves on the way there. Ken was wearing a hoodie, pajama pants and his church shoes. haha We have gotten a little too used to packing light!

Sunday we attended church with my parents and spent the afternoon cleaning things that I brought with us. It was slow and careful work that afternoon to clean individual pieces of jewelry and other small things so that they wouldn't stink.

While there, the girls tried on some old dresses of mine!  Here's a side-by-side of Katrina & I wearing the same dress. In the photo of Katrina, she's holding a bouquet from our wedding. 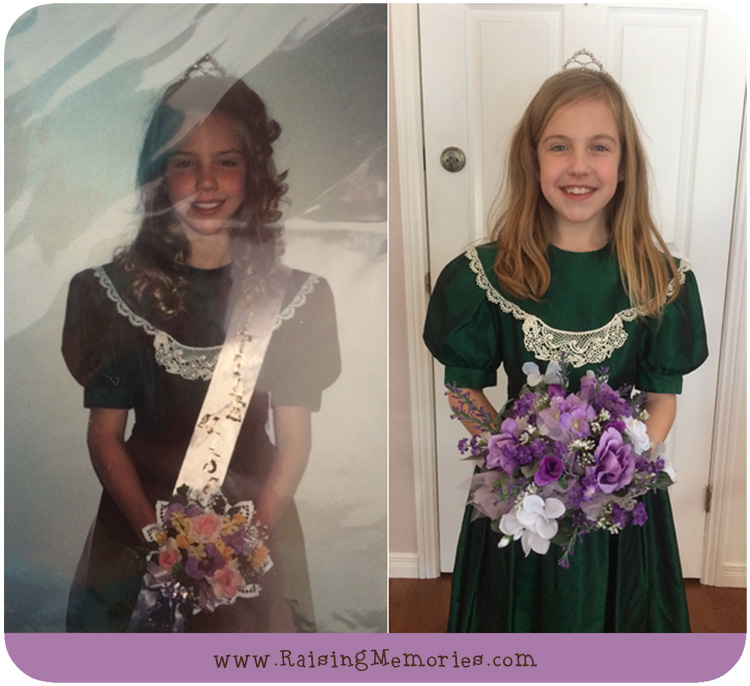 Here's a photo of Talia, wearing a dress that my mom made for me when I was a teenager! 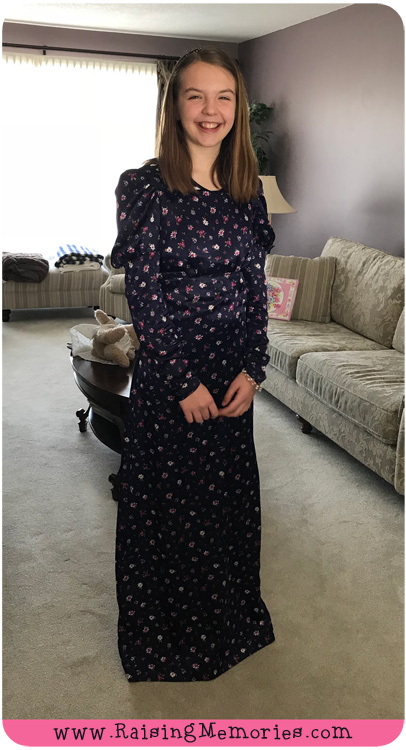 That night Ken took the girls back home so they could go to school on Monday. I stayed overnight at my parents' house with plans to continue cleaning little things there the next day.  The girls slept at Ken's parents' house and Ken went back to our house to take the last few items over to the storage unit so that our house could be cleaned on Monday (which didn't happen).

I cleaned things all morning at my parents' house and Ken ran errands (dry cleaning, phone calls, etc.) back home. I napped in the afternoon because I was so tired! I ended up staying one more night with my parents. We had dinner together & stopped at Dairy Queen for Blizzards. Little things like that really made a big difference during difficult times! Our focus was so completely on the work we needed to get done and on how overwhelming and daunting the list of things left to do seemed to be!

Ken picked me up from my parents' house in the morning. We had to have the car's doors fixed again because they stopped working after they were fixed the week before.

We picked the girls up after school and went to the storage unit to get a few things to clean. We also saw the empty house which still smelled (the cleaning hadn't started which was a big bummer for us since we had let them know when we would have our stuff out of it, hoping that would allow them to arrange to have it cleaned right when we were out. But they waited until we told them we were actually out, to make the plans, which meant nothing was happening yet with the house). 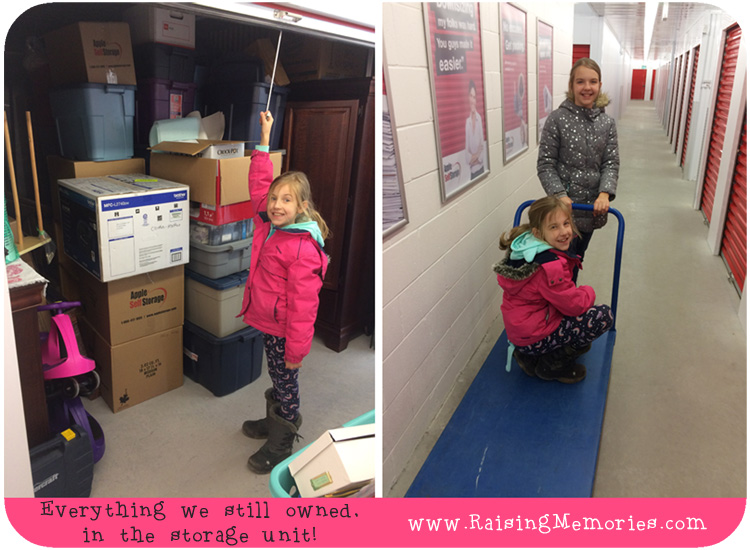 When Wednesday rolled around, I was feeling pretty overwhelmed by everything that still needed to be done. We had a lot of things packed in boxes in the storage unit that we didn't have time to clean before packing. We also had a LOT of laundry still to do. So, we tried to make a list and organize our priorities. I spent some time organizing smokey laundry so that friends could help with it, and I managed to work on a blog post as well.

My mother-in-law invited me to go with her to IKEA and Costco. We have a small pick-up IKEA location near us, and it was fun to walk around in a couple of stores and feel a little bit like a "normal person". I got a replacement cheese grater at IKEA, so that was a start to replacing what was lost! haha

We went to see the house (it had been cleaned the day before). Some things that should have been cleaned were not cleaned and they left a big stain on the floor. So we talked to them about it and they came back to strip & wax the floor and finish the cleaning. We were getting close to being able to move back in, but at the same time we were preparing for Ken to fly out to Utah for a week to see if he liked the lab where he had the opportunity to work. Things weren't slowing down any time soon!


Keep Reading: Smoke Saga ~ Part 5
(or you can go back to part 1 to start at the beginning)