It's September!! How did this happen?!!

I've pulled together a post about our August and I have a few thoughts to share at the end of it... I'd love to hear your thoughts on the subject & then get into it further in the future, so hang in to the end if you think you might like to weigh in! 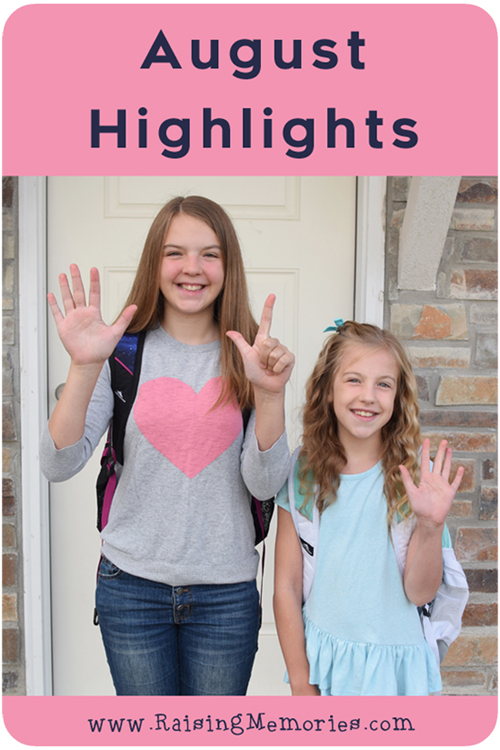 Near the beginning of the month Talia and a couple of her older cousins had the opportunity to go to a special youth event for a day. While they were there we met with 2 of my sisters-in-law (& a bunch of cousins) at a park. Katrina brought a treat she had created for everybody. 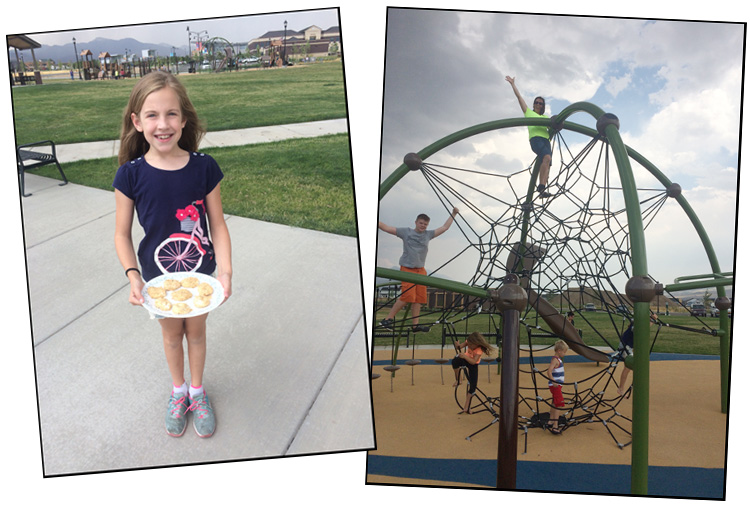 She was telling her Aunt Betsy about the company she wanted to create (part treats she creates, and part party planning) and Betsy invited her to organize the games for her cousin Donovan's birthday party that weekend!  Katrina was so excited! :) Here are a few photos from that party:

Katrina had everyone draw a picture of Donovan & then he chose "the winner" which was then used for a game of pin-the-bow tie on Donovan (each kid decorated their own bow tie). There was also a game of "who knows Donovan best?" and some of those answers got pretty entertaining ;)  I was proud of Katrina and so happy that Betsy had the faith in her to let her take over that part of her party- what an awesome aunt! 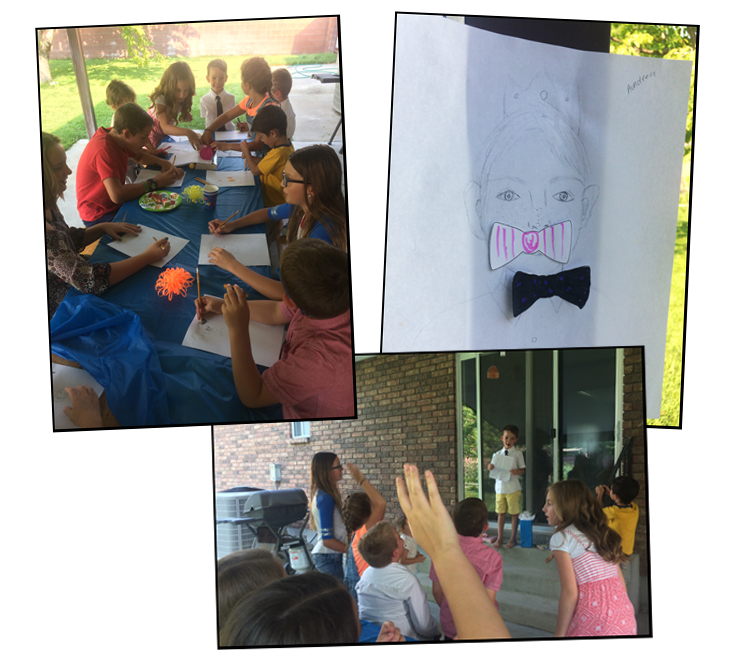 It took nearly 3 months, but we finally hung family photos in the living room!! (They were the first thing to go up on a wall in our new place)  I remember that Ken's foot was pretty sore after helping with this task. He could barely walk with the boot, without crutches, and not for very long.

For a large part of the month, he wasn't seeing much improvement at all. Finally near the end of the month, the swelling seemed to be staying low (still there, but low) and he was starting to be able to go without crutches for longer periods of the day. Finally at the very end of the month, he went to his first physio appointment! He was told that most of the healing is hopefully finished (although there is some healing left or else it wouldn't be swelling) and that now he needs to work on his range of motion and on loosening things up.  We're not sure how long it will take, but we're so happy that there is progress! 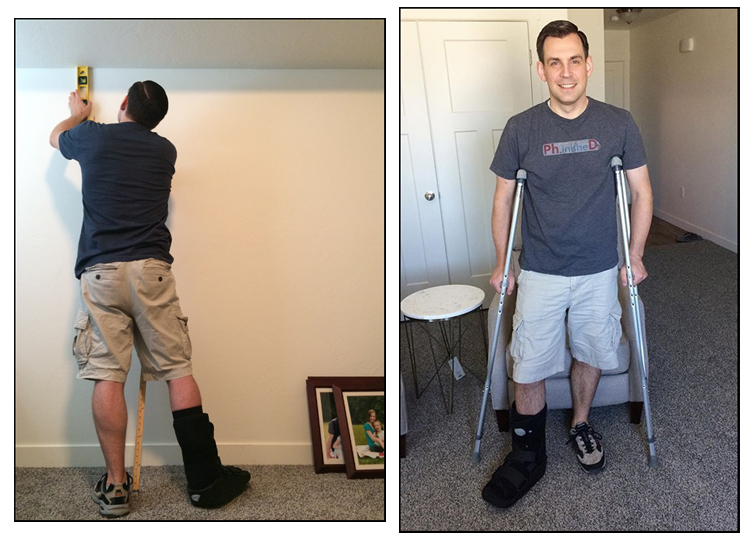 Talia got a letter from her teacher in Canada, with letters from her classmates & a yearbook. This was a huge highlight for Talia. I'm so grateful for such a sweet and caring teacher who made Talia's grade 6 year so positive and made a big difference for her, in this difficult transition to a new school! 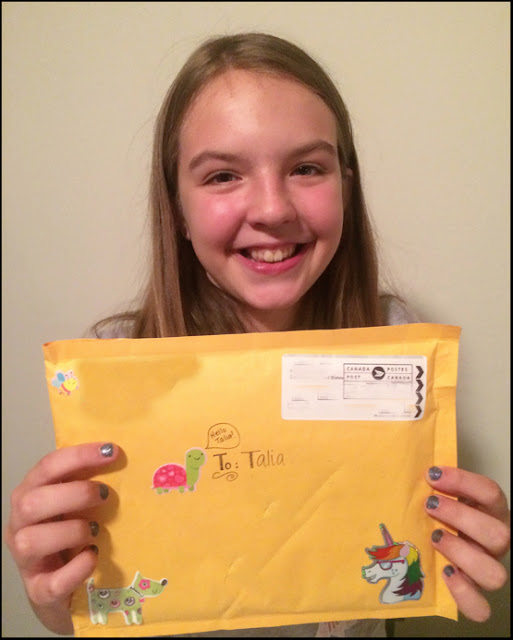 My sister & her daughter drove us into Salt Lake City to pick up a coffee table for our living room and while we were there we went out for lunch and a treat! We found a delicious cookie shop called Ruby's Cookies and I hope we get a chance to go back there someday- they were so good & unique! 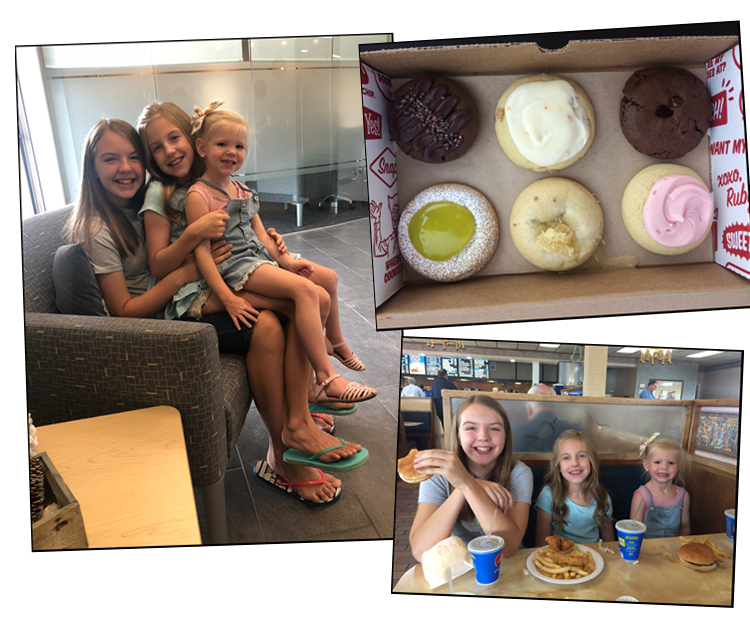 We got a tree in our backyard! Then 3 days later we got grass! We had been waiting 3 months for this and getting excited every time we saw progress ("They took out the weeds today!", "They're putting in the sprinkler system across the street!", "They've delivered sod!!") 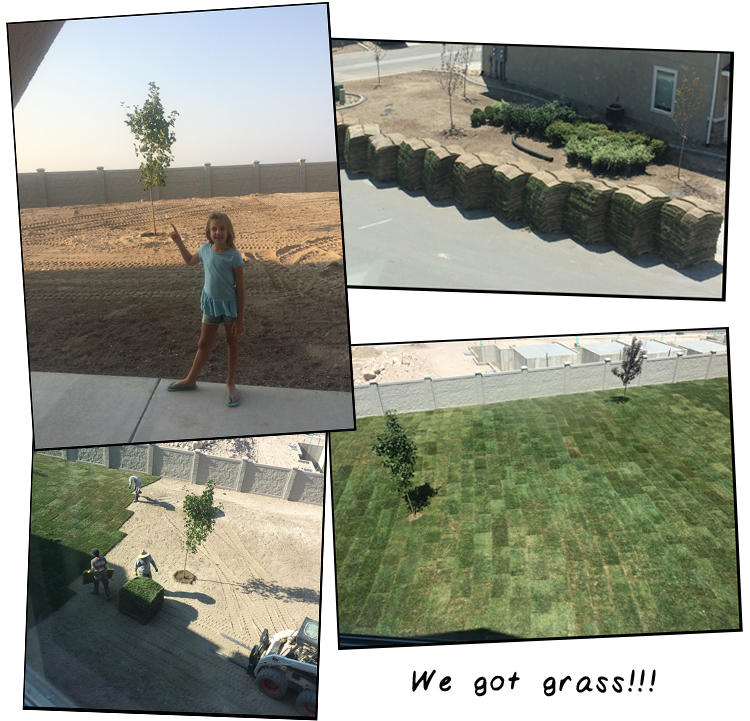 There's a local cookie dough shop called DoughCo and they had a special deal on one day. I found out about it a bit late, so I pulled Katrina out of bed & we went to the store together. What a fun night! :) 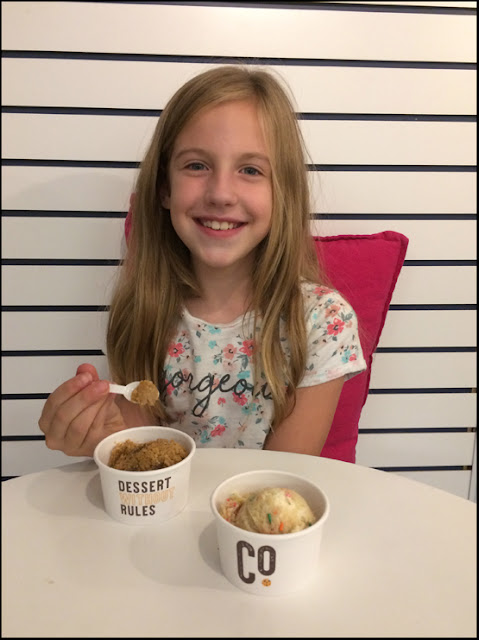 My sister had her baby boy in August and the girls & I were excited to visit them in the hospital. Ken got to meet him a few days later once they had come home. We are so happy to be in Utah for his arrival! :)

We found time in August to work on decorating the house a little more. I'm just about finished with the living room now, and I can't wait to share a blog post showing you what I've done with our little living room!  Katrina really wanted that rug for their bedroom but I couldn't justify the cost. ;)  She thoroughly enjoyed it in the store. haha 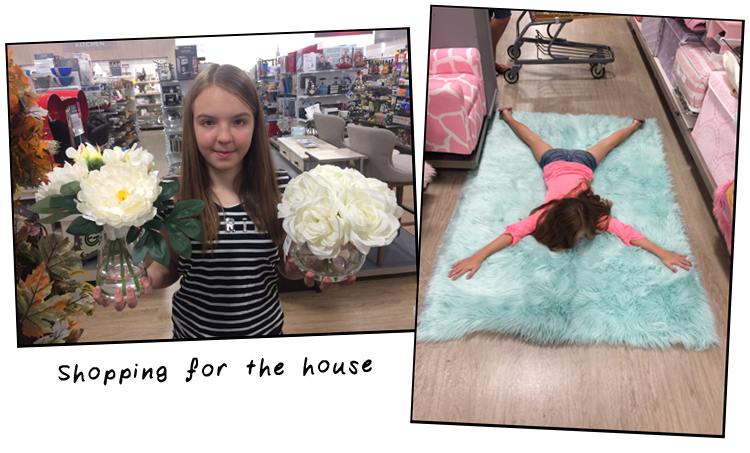 We spent some time at the beach with cousins and they had so much fun fishing! Katrina brought some more treats that she had created, to share with everyone. :)  I loved seeing the mountains around us- they haven't gotten old yet. ;) 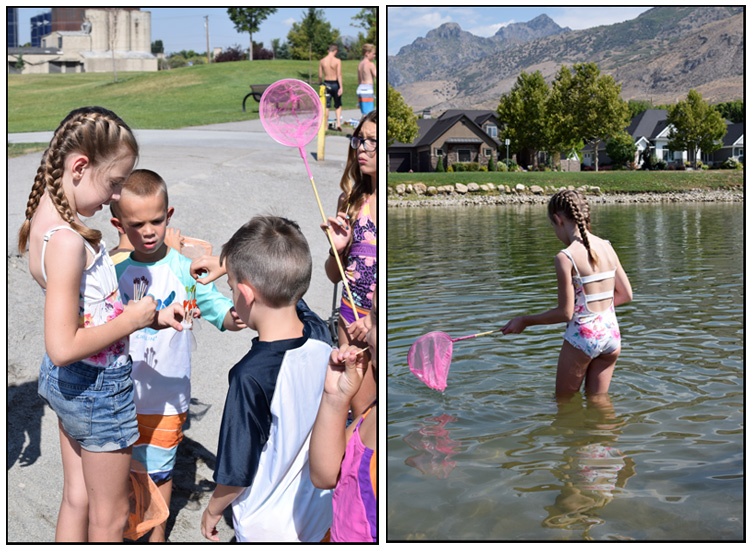 We found out that the immunization requirements are a little different here, so the girls had to get some before school. 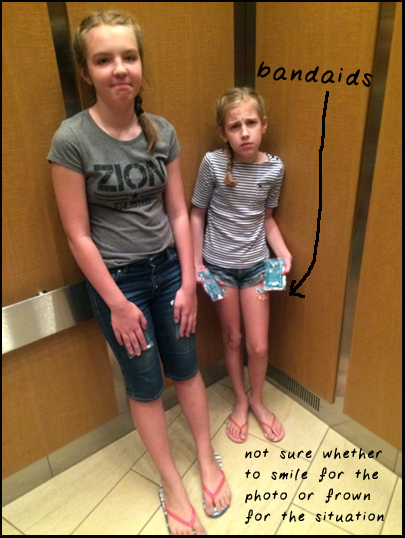 There was a special event at the University where Ken works so the girls & I made a trip to visit Ken's lab. He showed us around and we grabbed a shot in front of one of the microscopes he uses. :) 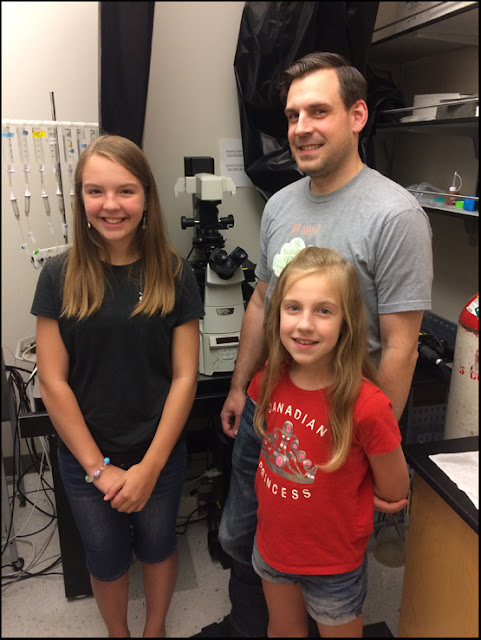 My sister-in-law Betsy and her kids were here for the summer (they live in Ontario). When it was almost time for them to go home again, we had one last dinner with all of the cousins together. It has been so cool to see them all together this summer, from the 3 families (and the 5 families during the reunion in July)!  We also had a girls' dinner at Cheesecake Factory one night but we forgot to get a picture! 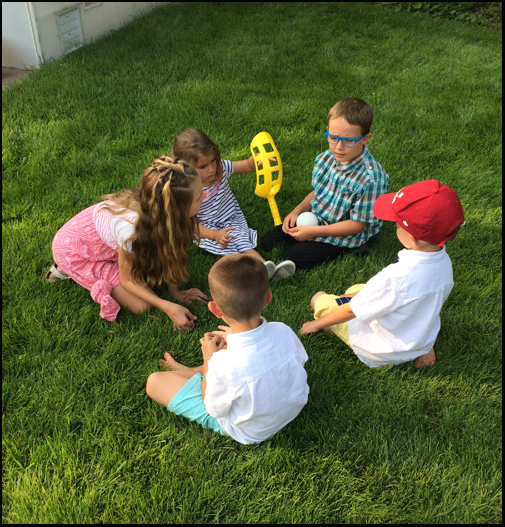 Tessa (the girls' cousin) slept over at our house one night before school started. The girls played games at night, and in the morning we had planned a breakfast picnic. Unfortunately it rained, so we ate our doughnuts on a bench under our picnic quilt! Then Katrina had the idea to finish our breakfast on the quilt, under a bridge. It was a fun time and I think we made some memories that will last. :) 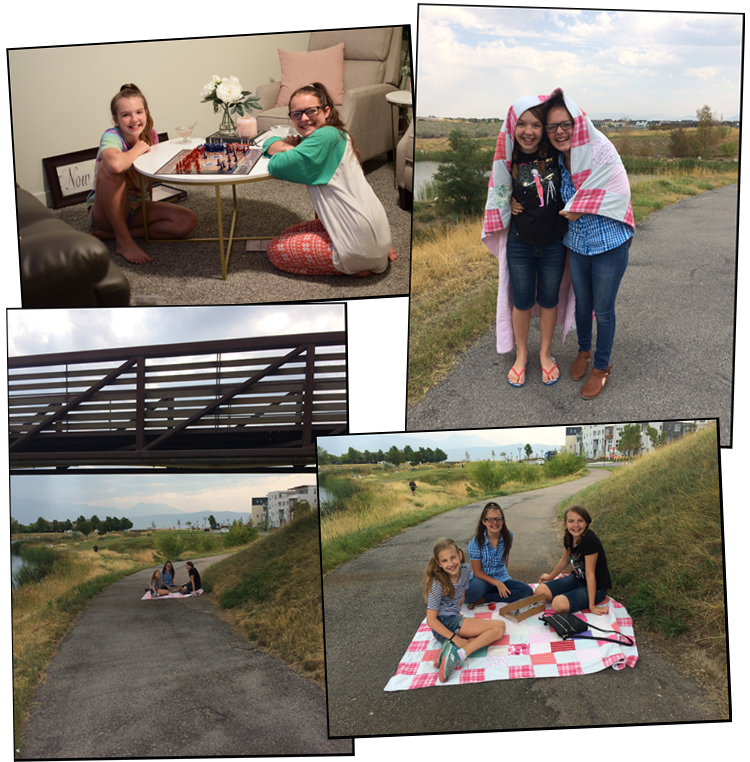 That same day, I went over to my sister's house to take some newborn photos of my brand new nephew! The girls went to a splash pad with the rest of Tessa's siblings & more cousins. My mom was in town for the baby's birth and took these little behind-the-scenes shots. :)  I'll have a post eventually where I'll share the finished photos with you. 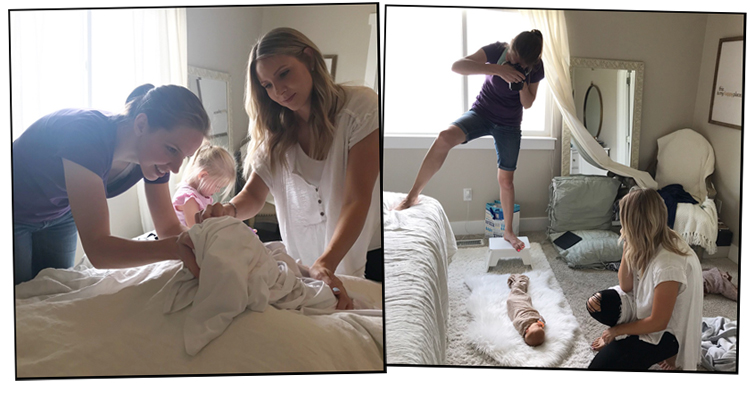 While my mom was in town, she presented my girls with new dolls. Since we got here, they don't have very many toys because of the smoke incident. They do have the toys that Hasbro surprised them with (which is awesome and has kept them quite happy) but I think my mom wanted them to have a doll. It definitely went over well! :) 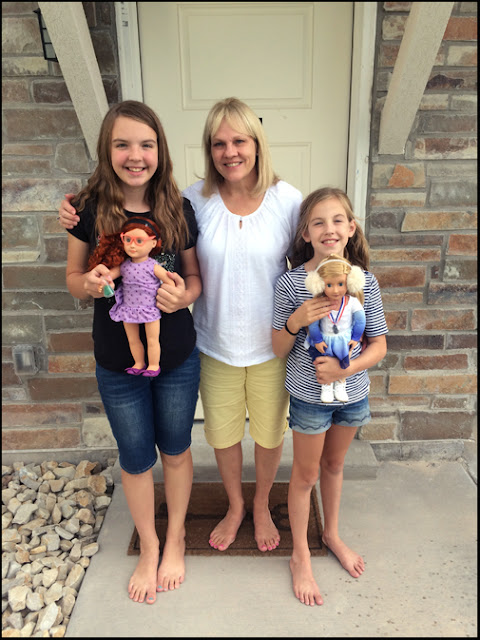 School starts in August in Utah, so we bid a said farewell to our extra-long break from school (since we left school in Ontario early to move here in May), and braved the first day of school! Talia started at middle school (& has a locker!) for the first time, and Katrina is happy as can be in her 5th grade class. 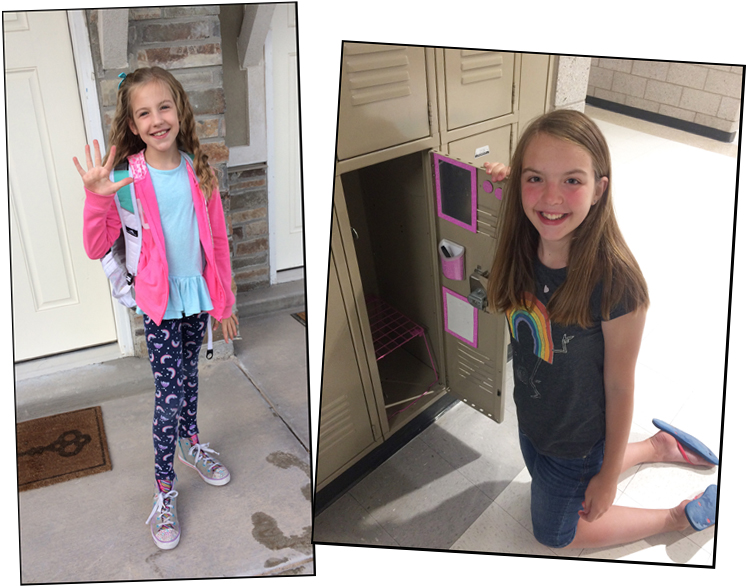 One night Katrina & I had the opportunity to be part of a music video that Alex Boye was putting together with a message about suicide prevention. It was a really neat experience to be a part of it, and to observe the filming of the parts we weren't in. We were part of the big crowd so you can't really see us in the video, but we know we were there! ;)  If you're interested in checking it out, it was just released and here's the video:

Phew! ...and I think that does it for August!  At least that does it for things that I took photos of in August (it's a lot easier to remember what happened when you've documented it somehow!)


Some Thoughts... what are yours?


As I write this, we're already a week into September and it's been a full week!  I hope you all had a fabulous summer and that you're getting into the swing of September and new schedules.  I've had a lot on my mind lately and some of it comes back to this blog and social media. I wonder what your thoughts are about social media and blogs; you, who read this blog. Do you find social media is a positive thing in your life? Do you find it inspiring?  Or do you find it discouraging? Does it bring you down? Do you flip-flop between the two ends of the spectrum and it just depends on the day, how you're feeling, and what shows up in your feed that day?  If you've read this far and you have some thoughts about your own experience on social media, I would love for you to comment or even email me with your thoughts. It's something I'd like to get into further but I really want to hear some other perspectives!