Our girls shared a room in our home in Utah where we only lived for 10 months- it was quite a whirlwind with moving to a new country and getting settled there! I took some photos of their bedroom while we were there and am finally now getting the chance to share them here. 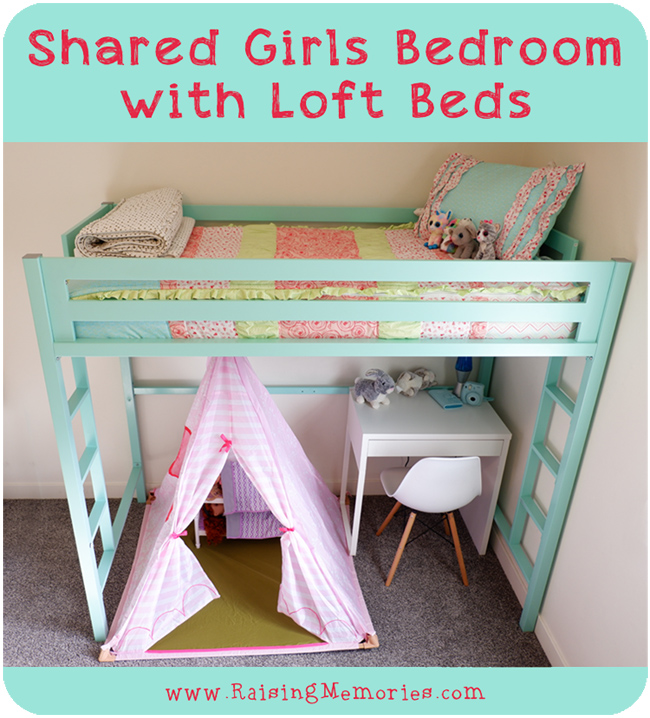 There were three bedrooms in our townhouse and we used the smallest one as an office. Ken & I used the largest room and the 2nd largest room (which was technically the master, with an en suite bathroom) went to the girls.

The only furniture we had with us for their room when we got to Utah were mattresses and a dresser. We knew we would be using their Perfectly Miss Matched bedding from Beddy's so when I found loft beds that matched the bedding, we were sold! 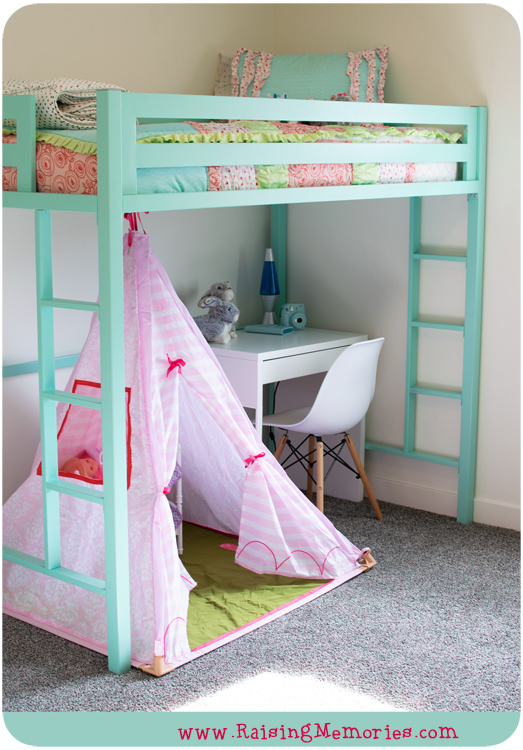 Loft beds were a great way to maximize the space in their shared room! Under their beds, each of the girls used a small Micke desk from IKEA with matching chairs we found on sale at Downeast Home. 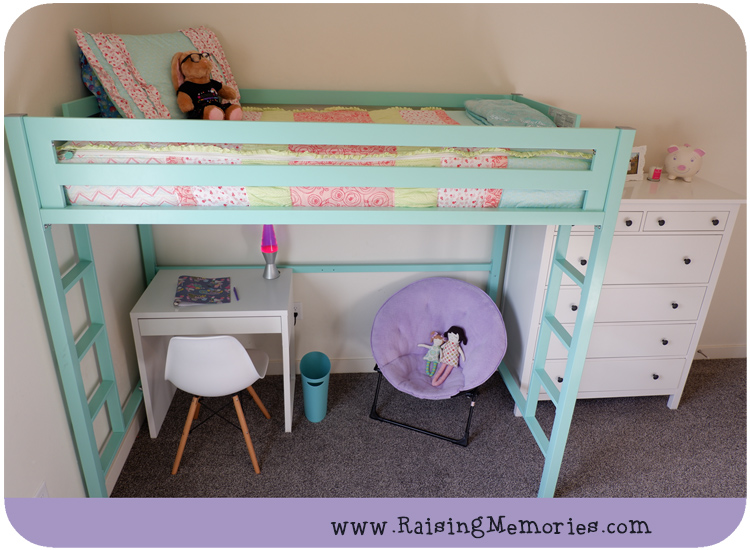 We came to Utah without a lot of little accessories because of the smoke incident, so we found that cute trash can that matches our colour theme at Home Goods. For Christmas each of the girls received another piece to put under their bed. Talia got a fuzzy purple reading chair.

The dolls on the chair are rag dolls that I made years ago, especially for the girls. After the smoke damage, while Ken & I were consumed with all of the work and decisions that came with it, my mom took these dolls home with her, carefully opened them up, disposed of their stuffing, washed the fabric, and re-stuffed them with fresh stuffing- good as new! They were already special to the girls, but now their story is one of survival! I love those dolls and am so glad that they survived because they are something special that I created from love, for my girls. 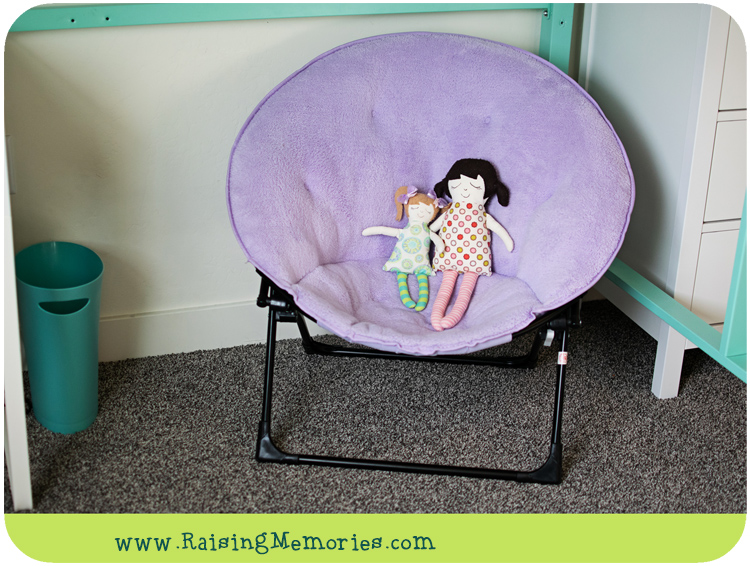 Katrina's gift was a teepee. I wanted her to have a little play tent, to give her a little place of her own to retreat to. So Talia had her reading nook and Katrina had her tent. I spent a lot of time researching teepee options, trying to find one that would fit well in the space under the loft bed. In the end, I was able to set this one up without the sticks that would normally hold it up, and instead I used the ties to secure it to the bottom of the bed, which held the tent up. It worked well and I saved the sticks so that we can use them in her current bedroom which has space for its full height. 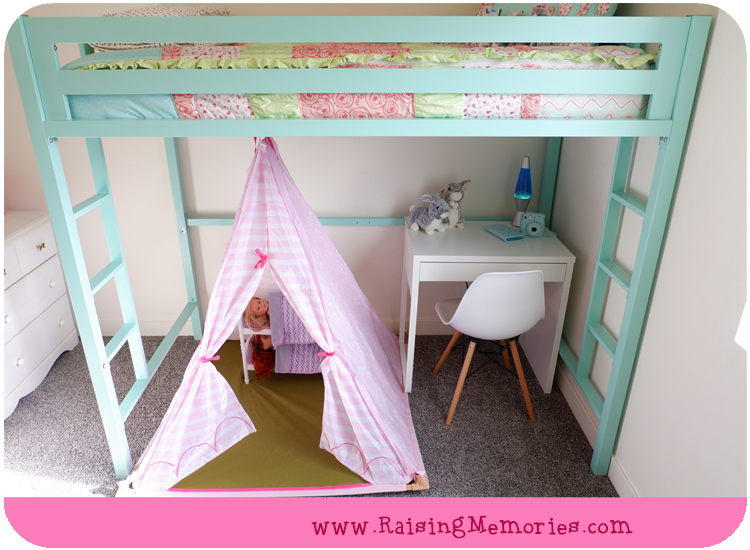 When my mom visited us for the first time in Utah, she gave the girls each a doll (which you can see inside of the TeePee). I think she was aware of all of the toys they had lost after the smoke damage and wanted to give them each something special. Katrina loved the idea of getting them bunk beds, so that was one of her birthday gifts. 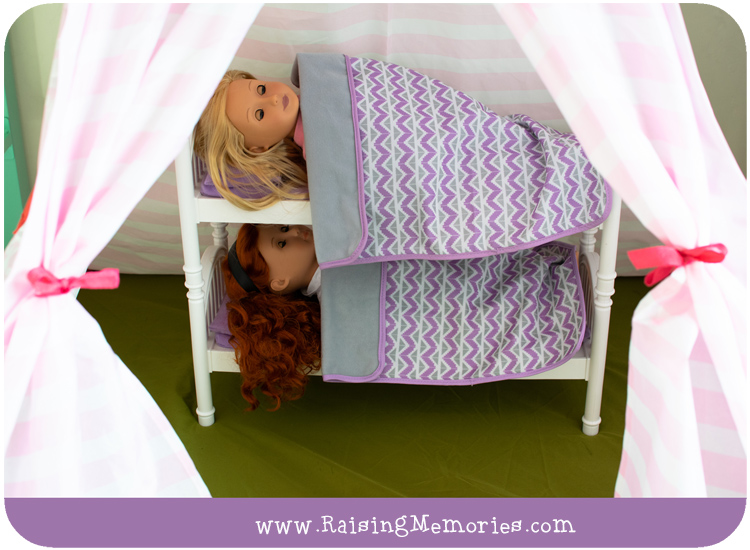 In this next photo you can see the white Hemnes dresser we found for Talia at IKEA. We originally bought it because it fit under the loft bed but once we set it up and put it underneath, we realized that although the drawers fit nicely under the bed, once you opened the top drawers, there wasn't enough space to look over the top of them, to see what was inside! (oops!)  It ended up working just fine at the foot of her bed though (which is a good thing after all of the work it took to build it!).

We brought the IKEA toy bin storage furniture with us, and the sling bookshelf which we have had for 8 years! We sold the bookshelf when we moved back to Ontario because our girls are more into chapter books than picture books now, so a traditional bookshelf seemed like it would fit our needs better. It was a little sad to let it go because of the way that it represents a bit of their childhood.

Fun Fact: That sling bookshelf is also the first item I featured on my blog in a sponsored post! (if you click through to that post, note how tiny the girls are in those photos!!) 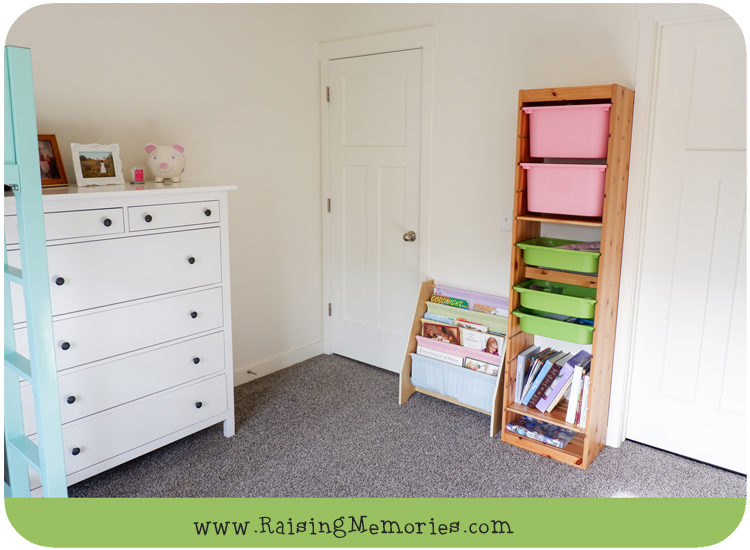 On their beds, they each keep some of their most special stuffed animals. Shortly before the smoke damage in our home, we went to Build-A-Bear and each of us created a special animal. Talia's was the cutest unicorn! Unfortunately, it was one of the things that received the most damage in the smoke, so for Christmas, we went to Build-A-Bear again and Talia created this bunny. It's wearing the glasses and clothing her unicorn used to wear- as evidenced by the letters that have lost their colour from repeated washing.

Katrina has a collection of small stuffed animals that she has acquired from special occasions since the smoke (one from Easter, one from Christmas, and a few others whose origin I've forgotten). 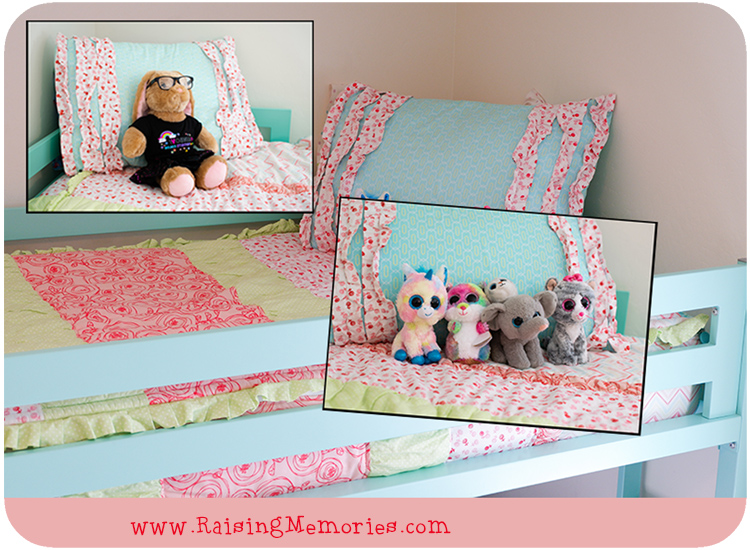 In the following photo, you can see that we brought the dresser from the girls' previous room makeover (if you visit that post, you can see how we altered it, and how we used it in that room). It became Katrina's dresser in this bedroom. 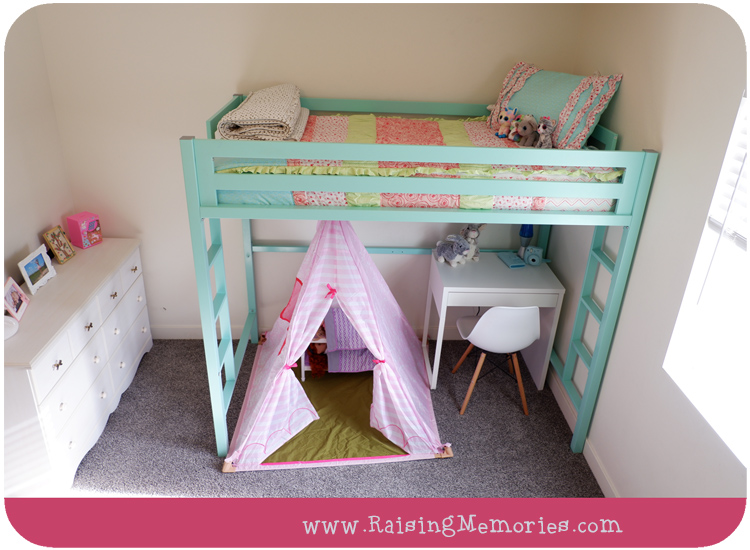 As I mentioned, this room was technically the master bedroom, so it included an en suite bathroom and a small walk in closet. With careful organizing, we made that closet work, with some toy and craft storage included. The bathroom was small with just the necessities. It was very convenient for the girls to have their own bathroom to get ready in! We were spoiled in that townhouse! In our new place, we have the same number of bathrooms but we all share the same bathroom to get ready in the mornings. 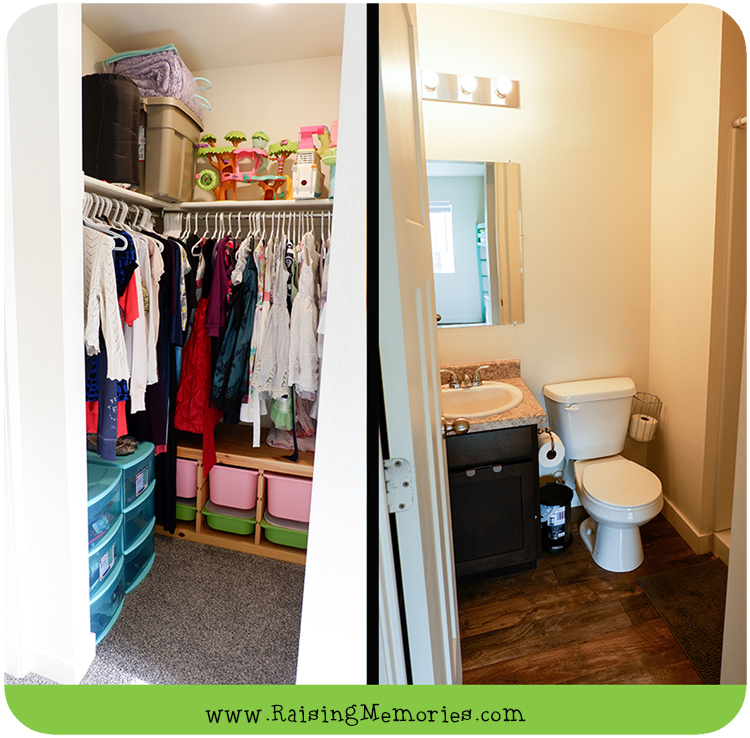 While we lived in Utah, we got this hair accessory storage hanger and jewelry shelf with hooks for Katrina's accessories. I liked the idea of that shelf so much that I ordered one for myself!  We hung these on the blank wall inside of their closet. 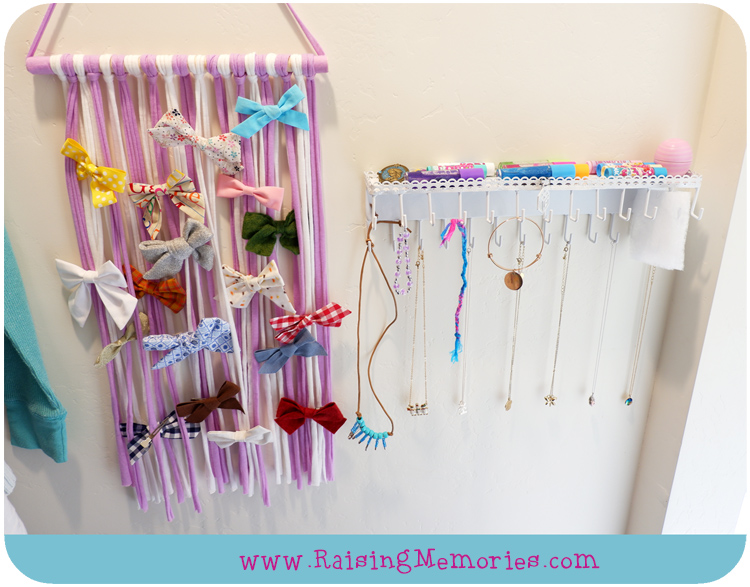 I was really happy with the way this room worked out for the girls while we lived in this home. If we had been there longer, I would have done more with the walls, but our time in Utah ended sooner than we expected. In our current home, the girls each have their own bedrooms so we're starting over. I look forward to sharing those with you someday too!