The third book in Obert Skye's Wizard for Hire series was recently published and Talia has just finished reading the trilogy.  She has a little teaser for you about each of the books, her thoughts on each one, and on the series overall. Then we have a giveaway- one of you will win the set! 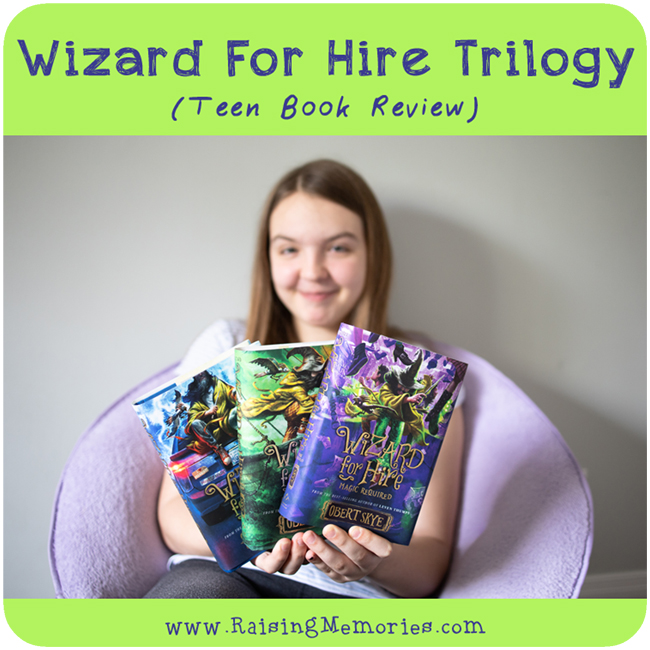 She's put together a summary of each book, her thoughts on their pros & cons, and at the end of the post, you'll have a chance to win the triology!

Ozzy Toffy is a seven year old boy when his parents decide to move into a remote cabin in the woods, with lots of food and supplies. Ozzy and his family are happy there, until the day his parents are kidnapped. Ozzy lives alone, except for a robot bird named Clark, too afraid to go to the police, for 7 years.

One day while exploring the town, he sees an ad in the newspaper: “Wizard for hire, call 555-SPEL”. Ozzy is skeptical when he meets the self proclaimed wizard called Labyrinth (or Rin). Ozzy didn't think wizards ate breakfast for every meal or wore high tops, and he was pretty sure wizards were supposed to do magic, but Rin did not.

With the help of Clark, a kind school girl named Sigi and the crazy wizard, Ozzy starts a desperate quest to find his parents. What could go wrong?

This book was really interesting, and I loved reading it. Mostly every thing was good, but the beginning of the book was a bit rushed for my tastes. The story line drew me in, and I was excited to start the next book. I would recommend this to people who enjoy Brandon Mull and other authors along the same lines. This book would be great for experienced fantasy readers, or someone just looking to start out.

Rescued by his friend Sigi, Ozzy can’t remember how he ended up drowning in the ocean, let alone that he walked right into the water himself!

He could really use Rin’s help about now, but the wizard is as elusive as ever, and his robot bird, Clark, is as unhelpful as ever. When a mysterious package arrives, containing two plane tickets, one to New York and a return ticket for the next day. Sigi, assuming that the package is from Rin, demands to go with him, and gets plane tickets for herself. They arrive and are confronted by more adventure than ever.

This book was a really good continuation of Wizard For Hire, and I loved every bit of it. The book was well paced and never got boring. The story line was seamless with the last book, answered questions, and left me with better ones. I was super anxious to start the next book and see what happens.

Ozzy and Sigi are being hunted by Ray, one of the most influential people in New York who has a past with Ozzy’s father. Ray is determined to get a hold of the discipline serum that Ozzy’s parents made and injected into him.

Ever eccentric Rin introduces Ozzy to four more friends who also say they have magical abilities, but Ozzy has no reason to believe their magic is real (they never seem to use it) or that they can help. Because of the mind-controlling serum, Ozzy can control the minds of animals and people. He continues to doubt his friends supposed magical abilities and thinks he does not need magic because of the serum. He later finds that things are more magical than they might have seemed.

This book was a wonderful finale to the story of Ozzy Toffy. I think anyone can relate to Ozzy because we all experience what it’s like to be lonely as a teenager. 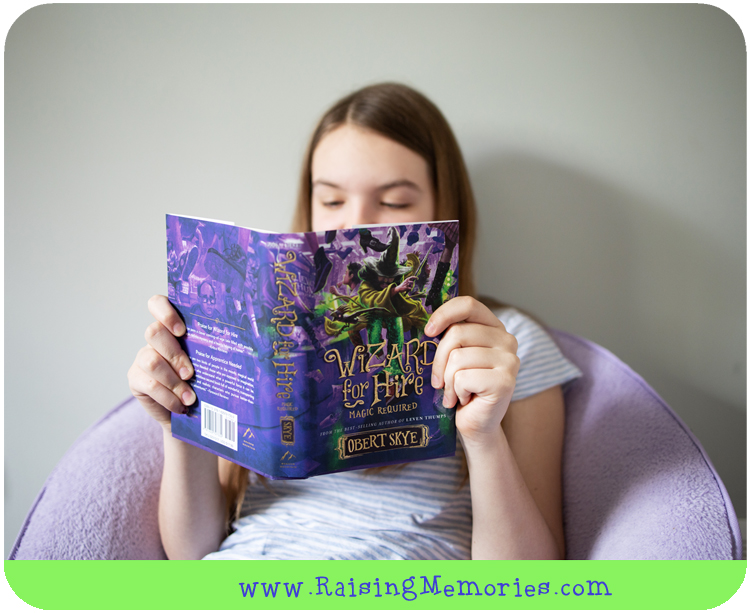 My only criticism of the series is that there are a couple of times in the series where things happen that aren’t fully explained which left me with questions and a little confusion. I would recommend this series to anyone who needs a good read.

When comparing this series with some of Brandon Mull’s fantasy series, I would say it’s comparable to Beyonders and 5 Kingdoms. In comparison, Dragon Watch and Fablehaven are more advanced reads with more characters to keep track of and a longer, more in-depth story.

Check your library for this book, or you can buy it at Deseret Book (online or in-store). It's also available on Amazon.com if you're in the USA or Amazon.ca if you're in Canada.

We've teamed up with Shadow Mountain Publishing to give one of you a copy of the Wizard for Hire Trilogy!  To enter the giveaway, fill out this form: (giveaway is open to residents of the USA)

Disclosure: Shadow Mountain Publishing sent us an advanced reader's copy of this book for review purposes.