I bought some Pony Beads for Talia and brought them out today. She was so excited to see so many! :) She picked out a pipe cleaner and went to it. Then she announced to me that she was making Valentine bracelets (I had recently been going over upcoming holidays) and that the one she was making was for me :) 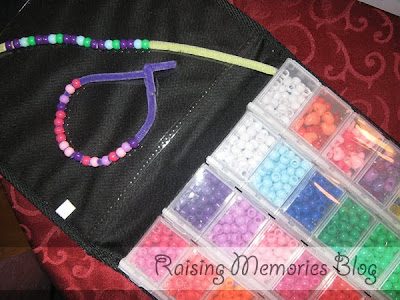 Then I taught her about patterns by starting one. I had been meaning to teach her patterns this way since this post in October, on beading! She figured it out, finished the pattern & announced that it was Daddy's Valentine Bracelet because it was out of "his favourite colours" (light blue, green, and purple evidently ;)

I look forward to more pattern practise (I mean play) in the future- it's so cool to see her learn- next I'll suggest that she create her own pattern (she was done with beads by the time I suggested it this time).