My girls' school had a Science Fair recently. One of its goals was to get parents involved, and because their Daddy's a scientist, he was all over this! :) He gave the girls each some ideas and they chose which one they wanted to do for their projects. Talia's was making "Hot Ice" (from Sodium Acetate).

It's just a mixture of baking soda and vinegar that (when done properly) is a liquid (kept cool in the fridge), and when you pour it out, it becomes a solid that is warm! (hence the name "Hot Ice") We made some at home, and it was so cool! (well, warm)

Below, I'll be sharing instructions to make your own, followed by some tips & tricks to help you if you're giving it a try! 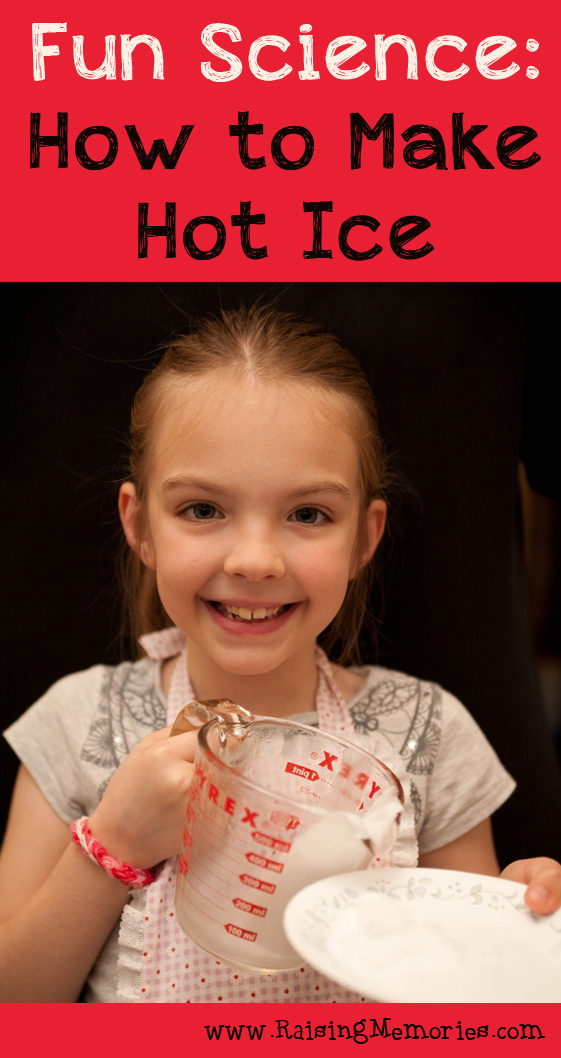 Homemade Sodium Acetate
1. Put 3 tablespoons of baking soda (sodium bicarbonate) into a pot
2.     SLOWLY add white vinegar until all baking soda is dissolved (usually a little less than 2 cups)
a.     IF YOU ADD VINEGAR TOO QUICKLY IT WILL OVERFLOW!!!!!
b.     This is now sodium acetate and water. We need to get rid of most of the water.
3.     Boil the water in the pot stirring occasionally (30 min – 1 hour usually)
a.     When the right amount of water has evaporated, a film will start form on the top of the liquid (the liquid is sodium acetate trihydrate – 3 water molecules for each sodium acetate molecule – which is what we want for our hot ice). The film is easier seen when not stirring.
b.     Add a little bit of water (1 tablespoon at a time) until the film disappears. 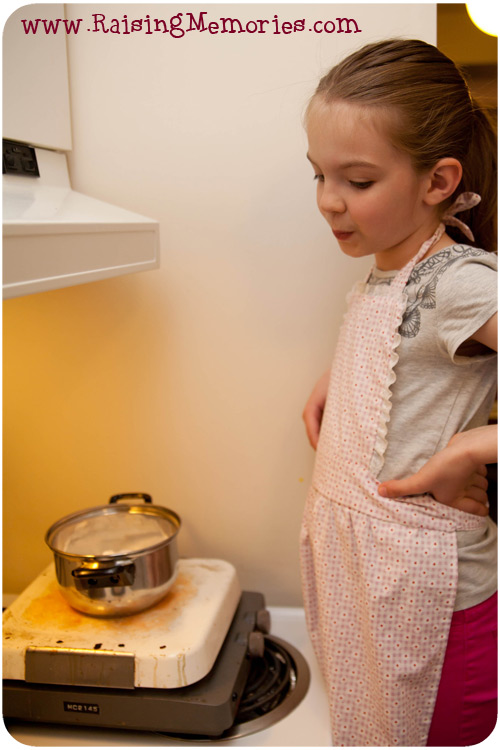 Talia watching it boil (we used a hot plate with a magnetic stir rod that Ken borrowed
from his lab, but you can just use your stove & stir with a spoon)

4.     Put 1 tablespoon of water in a glass container (that has a lid) and pour the liquid from the pot into the container.
a.     Be careful not to get any crystals into the solution and not to splash on the sides or rim of the container.
5.     Put on lid and place in fridge until cooled (30 min – 1 hour)
a.     Save the little crystals that form on the side of the pot – they will be used to start the crystallization process. The crystals are sodium acetate anhydrous (no water molecules).
6.     Once sodium acetate trihydrate (in the glass container) has cooled:
a.     Drop a sodium acetate anhydrous crystal into the bowl and watch…
b.     Or put some crystals onto a plate and pour the liquid onto the crystal
c.      Put a crystal on your finger and touch the liquid making it seem like YOU are turning it to ice. 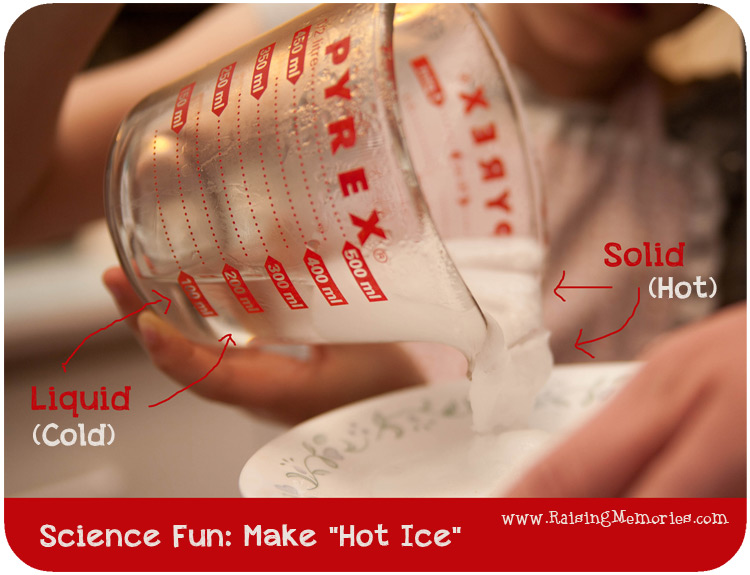 Notes, Tips, & Tricks:
1.     Making sodium acetate this way WILL make your house smell like vinegar.
2.     Hot ice can be reused by re-melting the crystals either in the microwave (be careful as it will boil over) or placing in a hot water bath (the crystals melt around 44 degrees Celsius)
3.     Homemade sodium acetate trihydrate will look brown because of impurities in the vinegar and baking soda (that’s ok! – the crystallization may be just a bit slower)
4.     You can use baking soda to start the reaction if you don’t have any sodium acetate anhydrous crystals
5.     If any crystals were added to the glass container before putting in the fridge, the solution will crystalize. Simply re-melt the crystals and try again – perhaps putting in a new clean container. Often crystals will form on the lid, so be careful when removing lid.
6.     The crystallization gives off heat – but only around 42 degrees Celsius, not enough to burn, so it is safe to touch.
7.     Sodium acetate is non toxic, but can sting your eyes and will make your hands smell strongly of vinegar so make sure to wash your hands well after touching.