How to Make an Olaf Cake for a Frozen Birthday Party

How to Make an Olaf Cake for a Frozen Birthday Party

Disney came out with a new movie just over a year go that you may have heard of called Frozen... ;)  My daughters both wanted to have Frozen-themed birthday parties this time around, so I have several Frozen birthday party idea posts coming up for you.  Today we'll start with an Olaf cake tutorial.  I know that "drawing" something onto a cake with icing can be a bit daunting, so I thought I'd take step-by-step photos of how I created this one for you so that it will be easier for you to attempt if you want to recreate it. :) 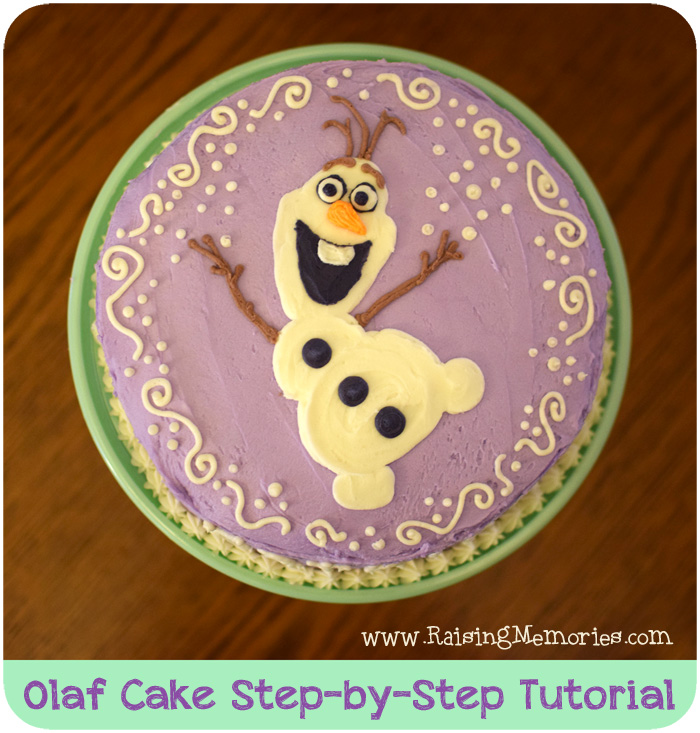 I started with a white cake mix (made with egg whites- no yolk).  I made one purple round cake and one blue round cake.  I also made a basic buttercream frosting recipe. I guessed on the amounts that I would need for frosting the cake and decorating the cake.

To Assemble the Cake:

1. Put some frosting on the cake plate first, to act as "glue" for the first layer, so it won't slide around.

2. Plop the first layer onto the "glue" frosting. (I cut off the top layer of each cake first, to make it flat, and I put the top layer down, so that the more perfectly flat and less crumby "bottom" would be facing up)

4. Plop the 2nd layer on top. (Again, I put the crumby top side down so that the top of the cake would be more flat)

5. Frost the top and sides with white frosting to make a "crumb coat" so that the final layer of frosting won't have any crumbs mixing in with it.

6. Frost the cake with the colour of your choice (we went with purple for our background colour) 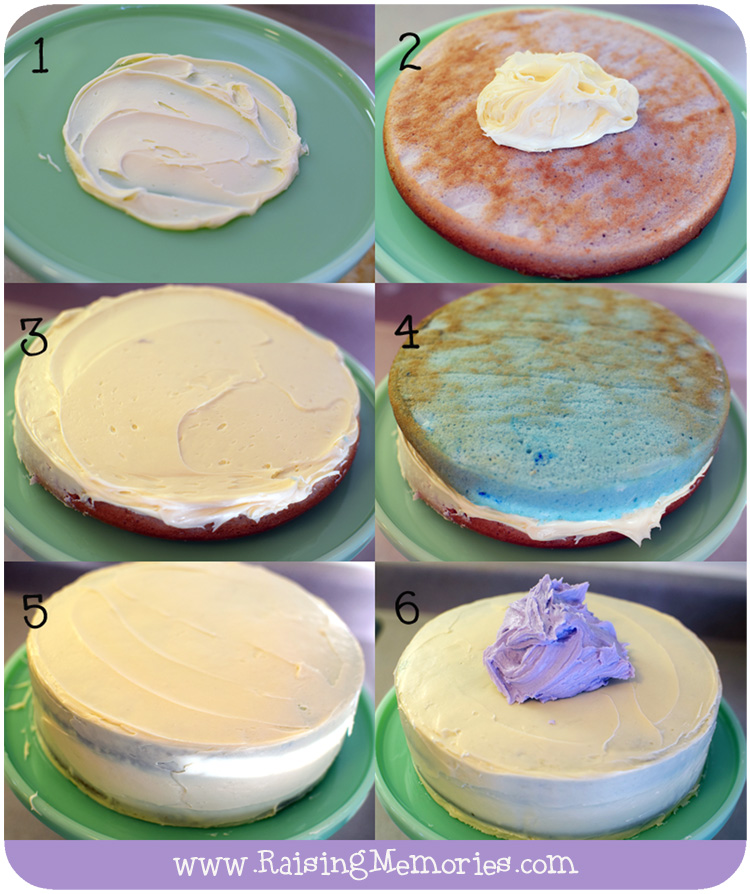 I divided the remaining white icing so that I had some that I left white (for Olaf and the border) and I made a small amount orange (for the nose).  It may look like a large amount, but that is a tiny bowl and a miniature spoon  you're looking at ;)

I overestimated the amount of purple icing that I would need, and I was worried about running out of white, so I added cocoa powder to some of the leftover purple icing and made it chocolate for the brown parts of the picture (worked like a charm!)

I added black food colouring to some of the purple icing to make black icing and that worked well, too. :) 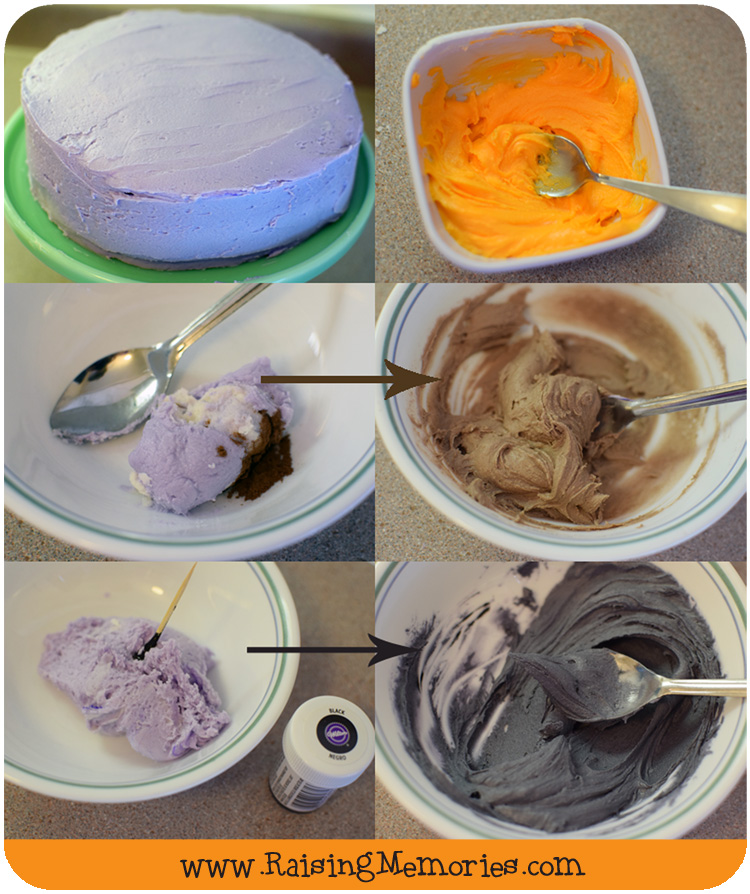 To Decorate the Cake:

I found a picture of Olaf online that I wanted to model my cake after (I was inspired by a cake I saw pinned from thehayleycakes), so I printed it to look at for reference.  It ended up being about the right size, so I cut it out and used a toothpick to mark a light outline on the cake to help me to get the proportions right! 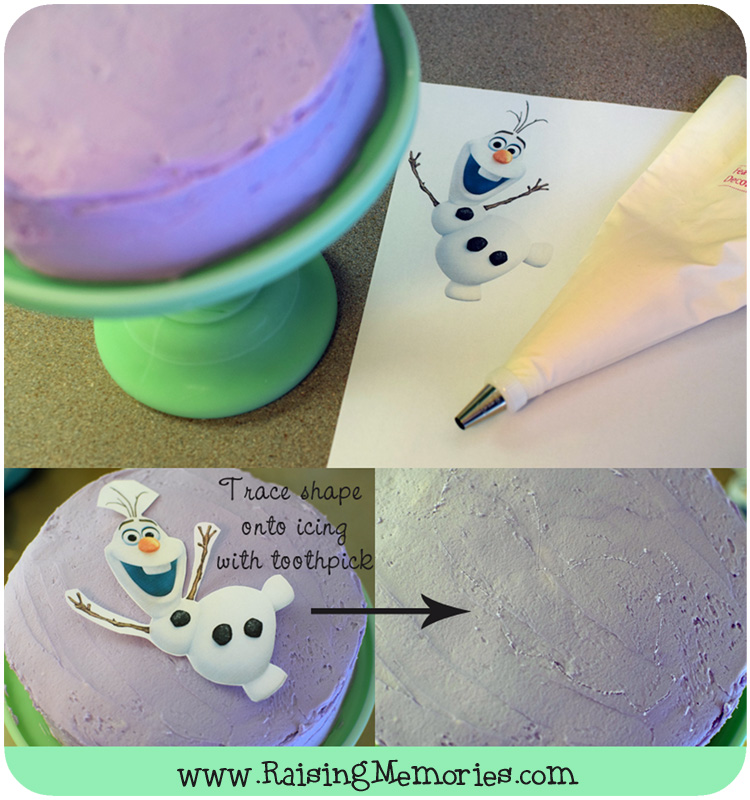 Next I used a wide, circular tip to pipe Olaf's body shape onto the cake (something like a Wilton 12). I smoothed out the icing with the back of a spoon.

To add detail to Olaf:

1. Pipe buttons on with large round tip (like a Wilton 12)

3. I also smoothed that out.

4. Draw outline of eyes with the same tip as in step 2 (that sure looked weird ;)

5. Add whites of eyes with large round tip (same one you used for buttons) 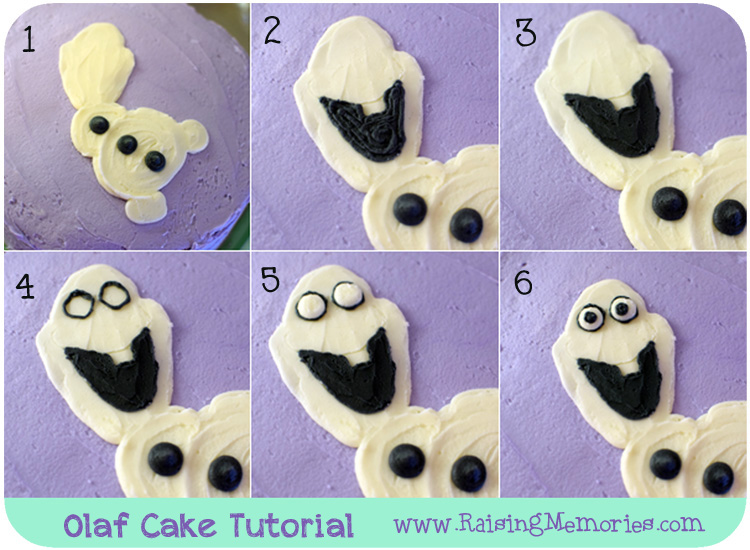 Next I went in with that skinny tip again with the chocolate icing and drew on the hair, eyebrows, and arms.  Then used the same tip for the nose.  I also got a little O.C.D. about the mouth and used a toothpick to add a black outline to the top of the teeth ;) 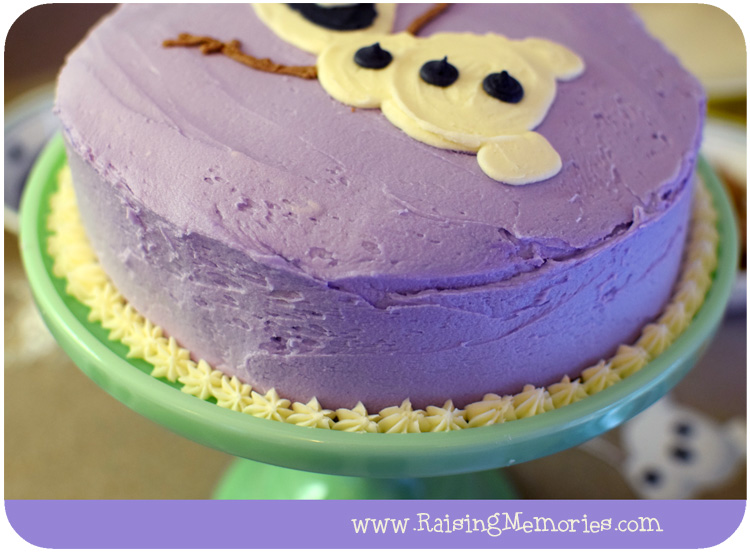 Then I got out a round tip and drew some swirls and dots around the top edge to make it look like a little blizzard swirling around Olaf ;)  I like the way it turned out!

I also wrote my daughter's name on the side of the cake.  It was fun to cut into it and see the coloured layers! :) 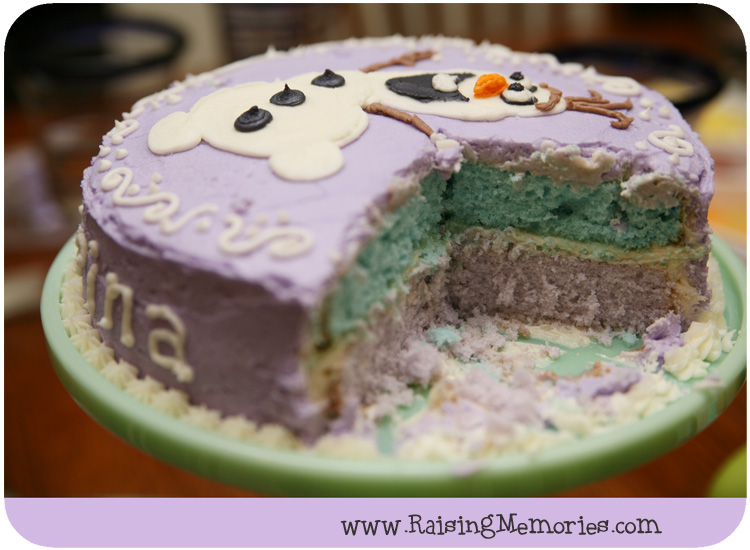 I hope this tutorial has made this cake seem tackle-able!  It was a fun one to make (and fun to see how happy Katrina was with the result :)

This is the first of a bunch of Frozen-themed party posts that I have coming up on the blog, so stay tuned for more ideas! :)