The first month of our Summer came in with a bang! We did a lot of fun day trips and little getaways within that month, and now we're starting to have more free days. Recently, I decided to take the girls to see a daytime showing of the new Minions movie. We had enjoyed the silly little characters in previous movies and I thought it would be a fun surprise.

That morning, I told the girls to put on their Minion Shirts (from this trip) and that was their clue to the special event of the day. :) 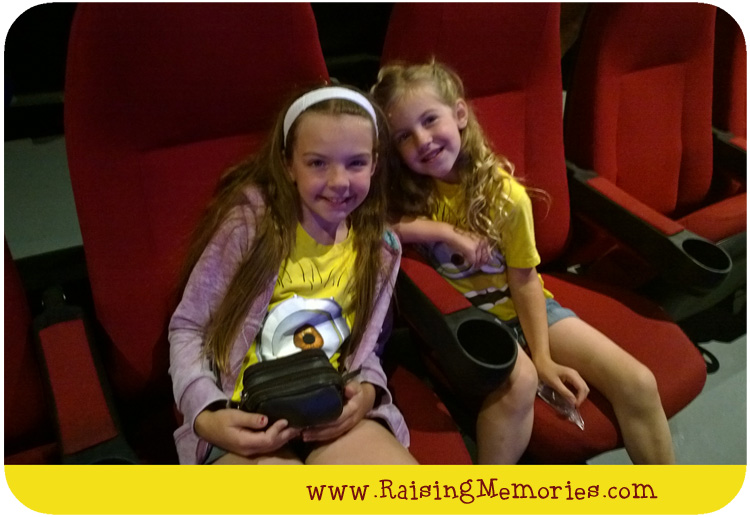 My kids still have some Halloween candy left, so they each gathered some treats from their Halloween bags to bring to the movie and we were off! I had also promised them that after the movie, we would stop by Walmart to pick up some Minion Kinder Eggs as a special treat! (They were excited to add to the Kinder minion collection they began recently).

Here they are outside the theatre with their Kinder Eggs: 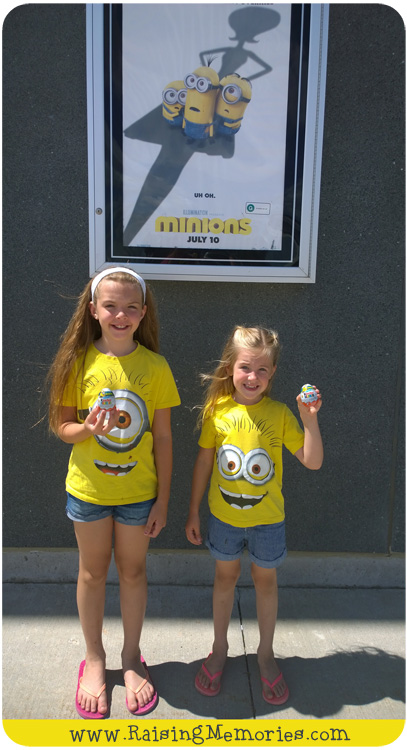 I have to say as a parent , that I wasn't a huge fan of the Minion movie. It was fine overall, but I didn't like the amount of "bare bum humour" (including a Minion in a thong) and there was a part that involved torture devices (which were not used in the traditional way, but it made me uncomfortable that they were included in a movie for young kids).  I asked my kids what they thought of the movie and their comments were positive.  I figure most of the things that made me a little uncomfortable probably went over their heads. So, depending on how sensitive you are about what you let your kids watch, you may want to look into the details of the movie before you take your young kids.

It was definitely a fun outing though and the Kinder Eggs were a great way to end it! (They went home to play with the puzzle one of them got, and add the little Minion figurine to their collection).

I love finding little surprise ways to make these free days of summer more fun and memorable!  We did something else really fun recently with a free day, and I look forward to sharing that with you!


Don't forget to visit the Kinder Canada Facebook page this summer (there are lots of games, activity ideas, and contests there!).

Disclosure: I’m a #KinderMom who is part of the KINDER® Canada influencer team; as part of my affiliation with KINDER® Canada, I am provided with special perks and products. All thoughts and opinions are my own.