I wrote this blog post in July. Then I chickened out and left it as an unpublished draft.
It's exactly 19 weeks later (many Thursdays since) and I thought of this post, re-read it, and decided to go ahead and post it. Maybe some of you will be able to relate to it. Maybe you'll have something to share from your own experience. Either way, I guess I just felt ready to share it, so here it is:

If you've been following my blog for a long time, you might remember when I used to post "Thursday Thoughts". It's been a long time since I wrote a post, just sharing my thoughts, and it seemed about time. 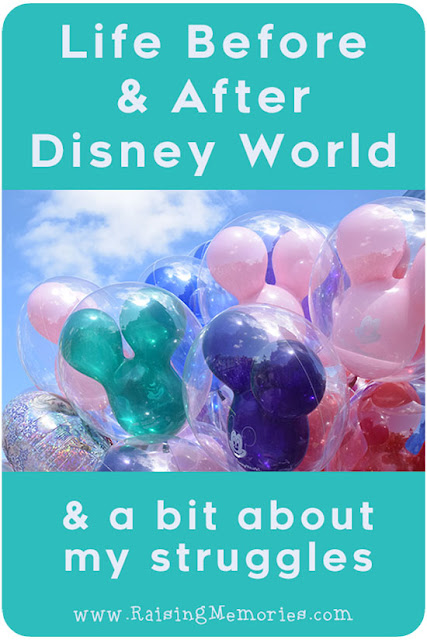 It's weird.
It's like our Disney trip separates our life now from our life before it.
Everything before Disney seems so far away.
Everything after Disney has been very difficult. (Well, not everything, but many things)


Things were difficult before Disney too- I won't forget the times I found myself parked in an empty parking lot, praying and crying, desperately pleading with God for this "trial" to end. It was so hard to have Ken's PhD continually take longer than we planned. It was hard to watch time pass by, knowing that we weren't getting any closer to the way of life I had envisioned for this time of our life.

Somewhere in the back of my mind, without ever consciously recognizing or stating this belief, I just thought that we would have our own house with our own yard for our young kids to play in. I was patiently waiting for that time to come, knowing that we had chosen a long path but that it would pay off in the end.

At some point though, I realized that our kids were growing up and the path seemed to keep getting longer and those things I thought were at the end of the path weren't happening. I realized that those things likely wouldn't be able to happen in time... meaning that by the time that house with the yard could happen, it would no longer line up with the time in our life when we would have young kids who wanted to play in it. That realization brought a lot of pain to me, emotionally, and a lot of struggle, mentally.

After Disney, the smoke happened, and weeks of struggle followed as we dealt with that. In the midst of those weeks, Ken accepted the post doctorate position in Utah & we planned our move. It was SUCH a whirlwind with so many things happening. So much went wrong- it has been almost comical the way that things continue to go wrong, even now, since early March. There has also been a lot of good- things that did work out well, and people who have helped us along the way.

I have really struggled throughout the last 4 and a half months (I just had to stop and count those months out like 3 times in a row, because I was so surprised to realize it has been that long!), with my thoughts and feelings. It is so hard to feel so frustrated for so long! It's discouraging, it makes me really sad, and then I feel quite guilty for having those kinds of thoughts & feelings because I know that things could be much worse and that we do have many blessings.

I've heard a lot lately about how our thoughts affect our emotions. It seems that we have more control over how we feel than we tend to think we do. I guess I'm new to learning about this because I can't seem to figure out how to put it into practice for a positive result just yet. At this point, more than anything, I think knowing that just increases the guilt & the confusion for me, because I ask myself why I feel so negatively about things if I actually have a choice- and I wonder how I can choose to feel more happy and to stress less. I hope I can learn how, but right now it's a struggle.

It seems natural for our minds to gravitate to problems- we notice and focus on the negative things, the problems, out of a need or desire to work on and fix them. The danger in it, I think, is that we can find ourselves "wearing blinders" so that we're focused on all of the negative things that are happening in our lives, so that the positive things shrink into the background, sink out of focus, or even completely disappear from our view.

On Sunday at church, we talked about praying for help with a situation by asking what we can do about it (rather than just asking for it to be taken away). That's something I've been thinking about and want to try. I'm also trying to focus more on gratitude, to see if that will make a difference for my mindset.

I'm grateful that I have taken the time to document our life this year, with photos & blog posts because each time I finish one of those posts, I am kind of surprised by all of the good there has been in each week or month. We've managed to keep life pretty fun and exciting for our kids, despite all of the things we're struggling with. If I hadn't documented it, I don't think I would realize how much we've managed to do that.

Sometimes I don't want to share my thoughts here unless I have a helpful conclusion or a way to tie it all up nicely with a bow. But today I just wanted to share my thoughts, even though I'm still right in the middle of all of this, trying to learn something from it. Maybe some of you can relate, and maybe some of you even have some advice from going through something similar. If you have any thoughts to share on the topic, I'd love to read your comments or emails!