Thursday we decided to bake brownies. While they were in the oven, both girls were on the floor by the stove, watching them bake. While I wasn't watching, Katrina screamed & started crying. I ran over, picked her up, and noticed her hand looked red & felt warm. I immediately put it under cold water. I checked it a couple of times unsure of whether she had actually burned herself as I suspected or whether she was crying because I was now freezing her hand. I saw a blister. I continued with the cold water. Then I wondered if there was more I could do for her & contemplated calling Telehealth (but I know it takes forever to get through to them), so I decided to call 911.

We've called 911 before from our house. Twice before. Both calls were initiated by Talia and neither of them involved an emergency. They were both flukes.

Long story less long, an ambulance came to check on her & I was left with instructions to keep her hand moist. (I knew that, but it was still good to know there wasn't more I could be doing). So after trying a wet receiving blanket (she didn't want to touch it) and forcing her hand under the tap to her fury, I filled the little plastic play tub with cool water and let her play and splash- that went over so much better. And after a little while I had a much happier baby.

Yesterday she woke up with a couple of mighty blisters on her fingers. After thinking about where she was at the time and where the burns are on her, I've determined that she likely held onto the side of the oven door & wrapped her little fingers around it, actually allowing her tiny fingers to touch the inside of the door. Poor baby!! 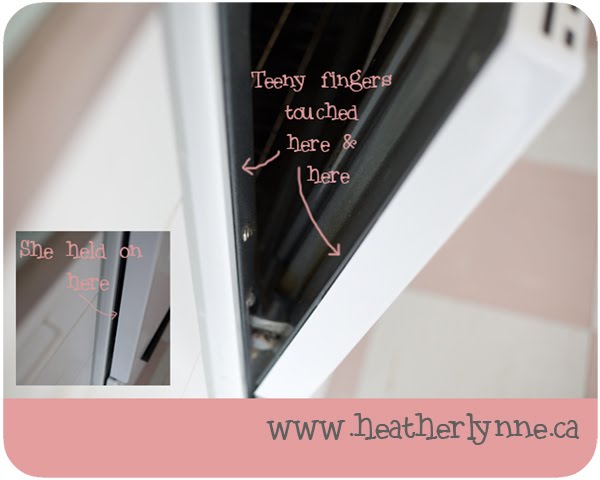 She didn't seem to be in pain yesterday. Ken put aloe on her fingers a couple of times while she slept, in the night. Yesterday morning she adapted well to being one-handed (we had her holding an aloe-soaked cotton ball with a baggie around her hand & a sock over that, and she was wearing a sleeper with fold-down mitts (with the mitt over that hand)... she's crafty & this was the first thing that she wasn't able to pull off!

I took the contraption off during her naps & a bath. Both girls got bathed yesterday because my mom came for the morning to help out and she brought with her a plug for the tub (we have been plugless for a week because someone came to fix the broken one and took it with them last Friday, never to return!!)

My heart hurts and I feel tired.

On a sweet note, after the whole ordeal, I went upstairs to find a bandaid box on the floor in the hall, with bandaids all over the floor, and I remembered Talia presenting me with a bandaid for Katrina down in the kitchen while I was on the phone with 911. :)
Related Categories: personal