I stepped over the baby gate (while looking at the table ahead of me), forgetting that the dishwasher was open (right where my foot landed- in the silverware).

I basically did a roll in the air, to try and avoid the most damage. I landed on the floor, on my side, with one leg in the air, and my face on the floor (resting on the wet cloth I was planning to wipe the table with). The baby gate was detached and laying across the open dishwasher (which had moved at least a foot from where it originally stood).

Both girls came running to my rescue & Talia immediately began to question me about where I had hurt myself. I told her my foot hurt (my other foot) and asked her if my toe nail was broken (it looked like it from where my face was) and she told me it was ok- there was just butter on my toenail (ha!). However she announced that my foot was bleeding & that she would run upstairs to fetch a bandaid and some ointment.

I was left on the floor with Katrina standing over me, her hands on her knees, looking down on me with excitement in her face. She said, “You essited?” I asked her to repeat (confused about why I should be excited about injuring myself) & she asked if I was excited to have a bandaid. (They both love it when I determine an injury to be bad enough for a bandaid). It was some good comic relief ;)

Talia came down ready to fix me up & I let her do it (and grabbed this photo while she worked away). Katrina was also “helping” :) What sweethearts :) 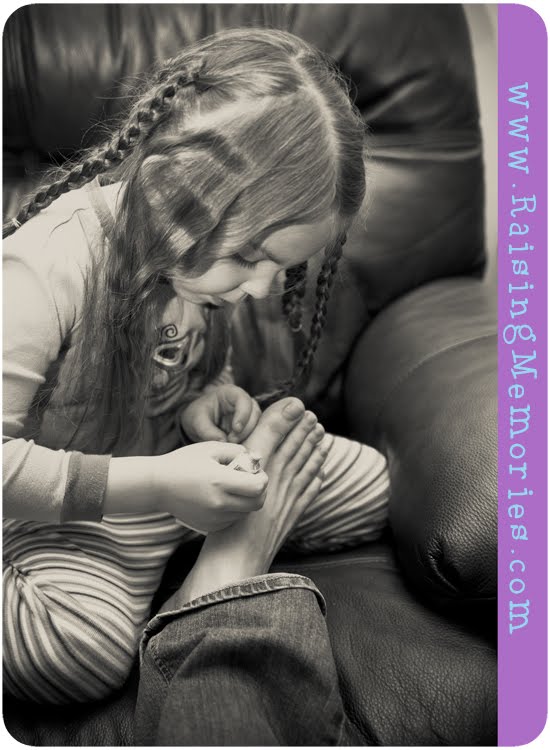 Congratulations to Amanda who won the Sugar Bellies Earflap Hat!