Monday Moments: You Made Your Bed, Now Lie In It

Monday Moments: You Made Your Bed, Now Lie In It

A couple of Fridays ago, Ken was out with some friends at a games night. We had plans to attend a movie the next morning as a family. Before the girls went to bed, I was encouraging them to clean their rooms so we could go to the movie the next morning (any motivation I can find..). They did pretty well but Katrina had not finished her room yet. She carefully and seriously suggested that she could maybe stop cleaning for tonight and have time to finish her room in the morning. I said sure and the three of us hung out for the evening, reading and talking until bedtime.

After putting the girls to bed, Katrina came downstairs a while later (I would have expected her to be asleep). She was wearing a housecoat (which is odd because she rarely wears it). She told me she had stayed up too late. I hugged her and agreed and encouraged her to go back to bed and go to sleep. She told me she had been working on cleaning her room and asked me if I could do up her housecoat for her.

I suggested that she probably would want to take it off before she went to bed and she said that's why she needed it, because she had made her bed so she would have less to do in the morning and she had no more blankets to put on top of herself! What a girl!

I told her she should have time to make her bed in the morning and she went up to bed. A little later I decided to go up and check on her and I found her bed looking like this (I turned the light on for the photo, later) : 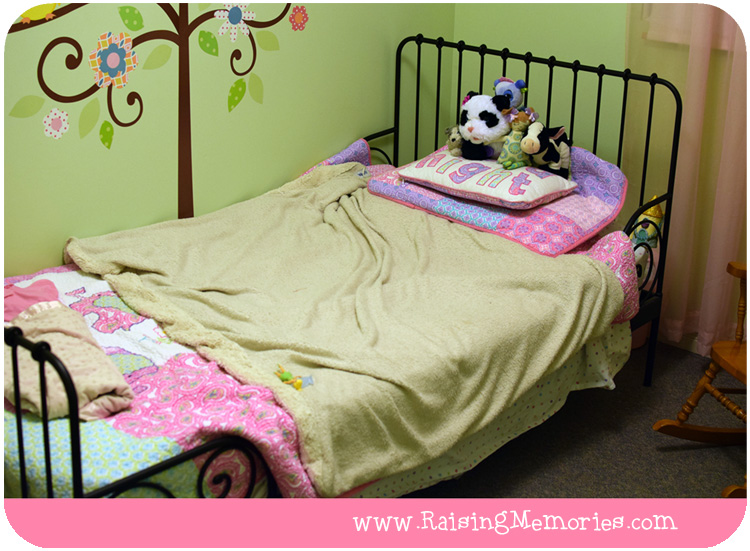 I thought "Oh no, poor girl is probably sleeping on the floor because she was so worried about her room being clean so she could go to the movie!"... then I looked around her room and she was nowhere to be seen.  My next thought was that she might be in my bed.. but she wasn't.  Next I tried Talia's bed (sometimes she'll climb in with her) and again, not there... at this point I started to get a little confused and had to get creative, looking for her!  I turned on her bedroom light, looked under her bed and in her closet.  I started calling her.  I checked my closet and behind my curtains.  I even went down to the basement and checked the bathrooms.  Finally I lifted Talia's bed-skirt and found this: 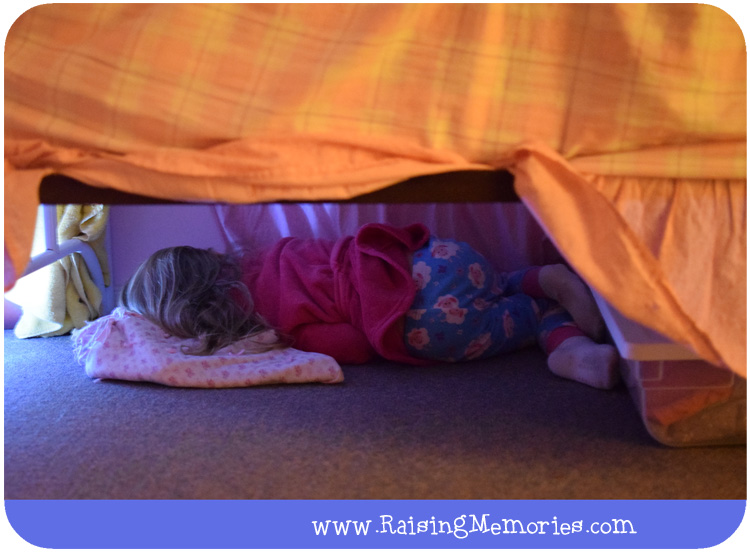 What a girl!  I'm not sure what made her decide to sleep under there instead of on her made bed (perhaps under that soft blanket she had draped over her quilt!)   Realizing it would be a tricky task to get her out from under Talia's bed and back into her own (and not wanting to wake her up to do it), I grabbed my camera and snapped these photos. I waited for Ken to get home to help me transport her to her bed.

Before that happened, Talia woke up to go to the bathroom and I asked her if Katrina was still under her bed.  She looked confused for a moment and then a look of realization passed over her face, she breathed a sigh of relief and said, "Oh, she's FREAKING ME OUT!"... haha Talia had woken up and heard Katrina breathing under her bed, but didn't know what/who it was!

Have you ever found your child sleeping in a strange place or position?
What's your best one?