Last summer we had such an awesome road trip across Eastern Canada! I thought it would be fun to revisit some of those experiences by sharing them again. It's the perfect time of year to start thinking about planning your own trip and maybe seeing what we did will give you some ideas or inspiration for your own trip!  (This post was originally shared on August 25th, 2017)

The idea for our road trip across Eastern Canada came to life one night while the girls and I sat, cuddled up on the couch, watching Anne of Green Gables. I knew I wanted to go someday, but that's when I really started thinking about doing it this year. We spent three nights in Prince Edward Island and most of our time in and around Charlottetown or Cavendish. This post is all about our Charlottetown adventures! 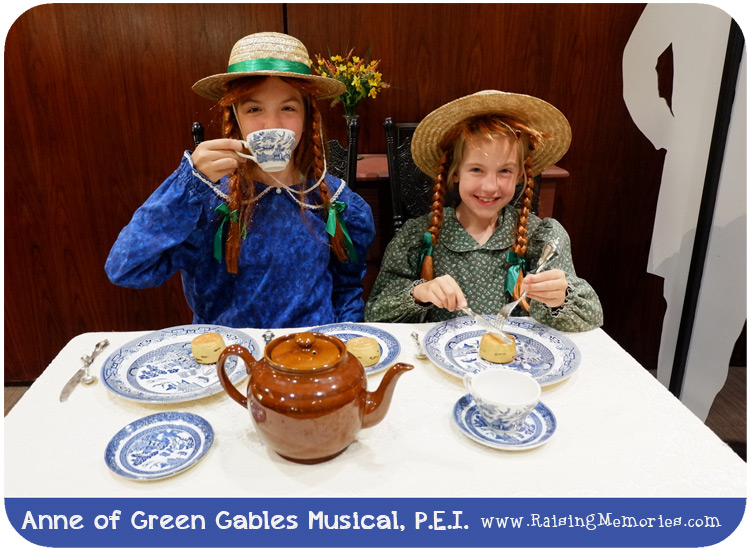 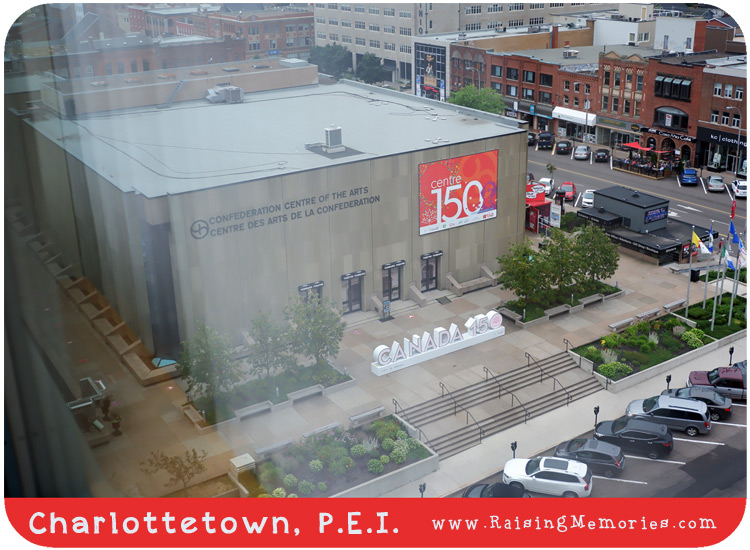 We also saw the PEI Sound and Light Show (an official Canada 150 event) at the Confederation Centre. Charlottetown is the birthplace of Confederation, so this show celebrates the special role it played in the founding of Canada. I didn't get photos of it, but I think we got some video, so I'll link to that when we get it uploaded with a vlog!

Speaking of our hotel, we stayed at the Holman Grand. The hotel was decorated in a modern style with accents of green. This hotel also had a very important thing for any travelling family: a pool! Ken took the girls for a swim during our visit there, but I stayed up in the hotel for that, so I didn't get a photo of their indoor pool, but I can report that fun was had by all who attended! Our room came equipped with a Keurig machine and our girls were excited to try hot chocolate in it (and we were excited too because it's rare that a hotel offers options beyond tea and coffee in the rooms)!

We were particularly impressed with how environmentally friendly everything seemed to be at this hotel, and throughout PEI!  In our hotel, there were no disposable dishes, and the lights in your room would only work when your room key was inserted in a slot next to the door. 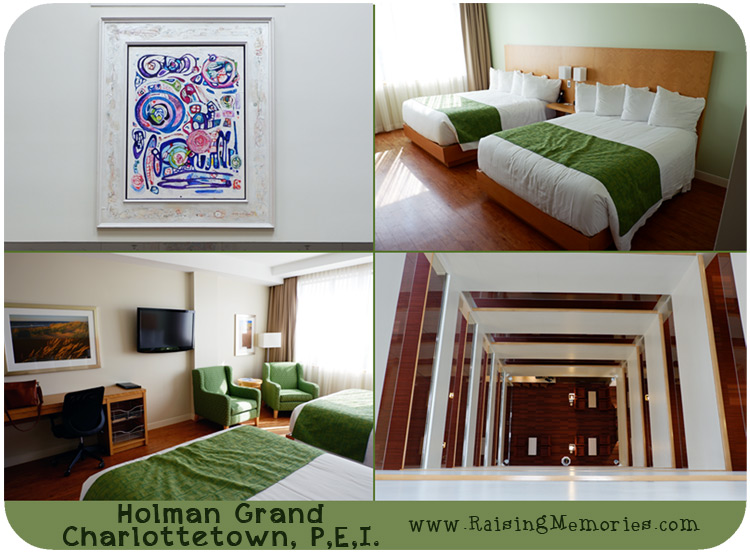 Another thing we noticed about PEI was that there seemed to be waste, recycling, and compost bins almost everywhere there was a trash can! That's not the norm at home, so we were impressed! We heard that they don't use styrofoam containers for food either.

The first thing we did when we arrived in Charlottetown was to go on a Lobster Fishing Boat Tour. I had so many photos and so much to say about this experience that I wrote a whole blog post about it! 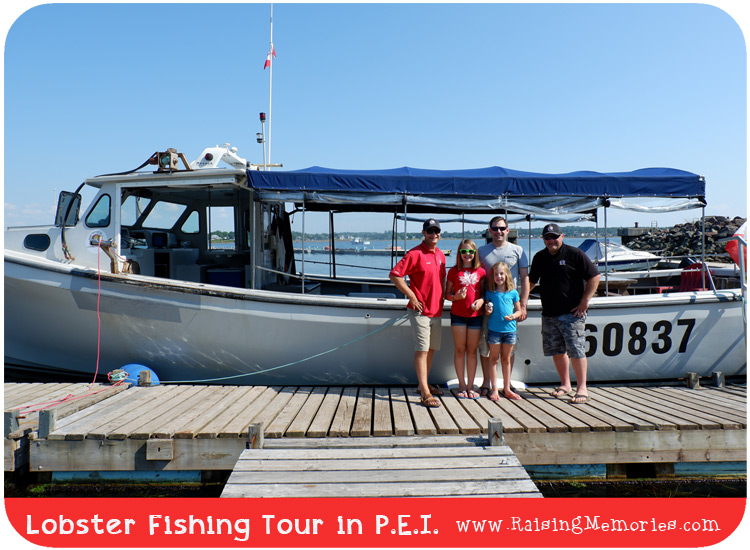 After our boat tour and checking into our hotel, we spent some time walking the streets in Charlottetown. I loved how colourful everything was! In the photo above, you can see a "Cows Ice Cream" sign. We visited the Cows shop by the water in Charlottetown and again, in Cavendish while we were there. 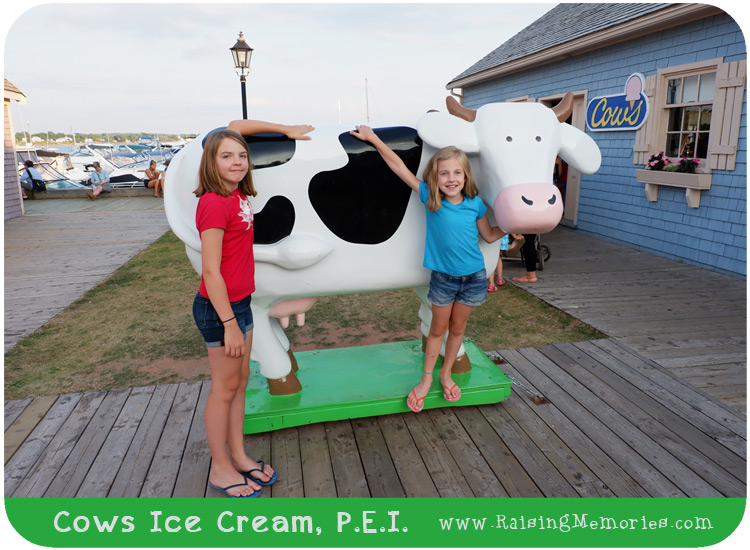 It's delicious handmade ice cream with a lot of unique flavours and has actually been named one of the world's top 10 best ice cream destinations! 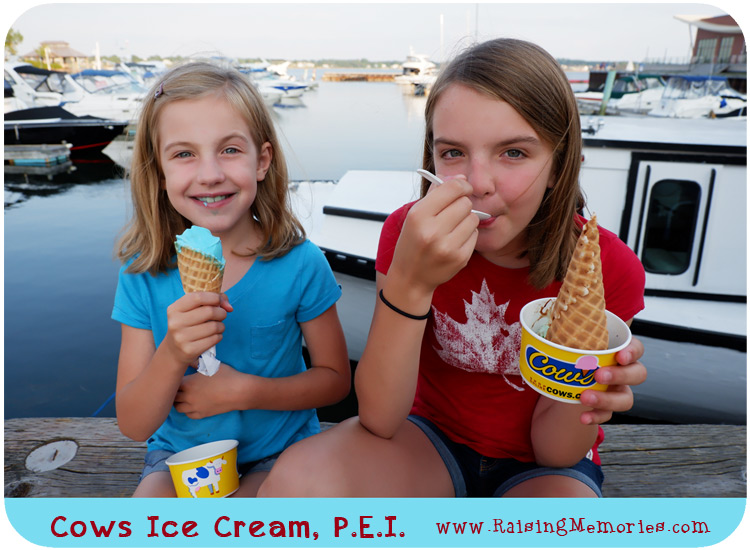 There is a pedestrian street in Charlottetown called Victoria Row where you can find local art, outdoor music, and food. There was a great atmosphere there! 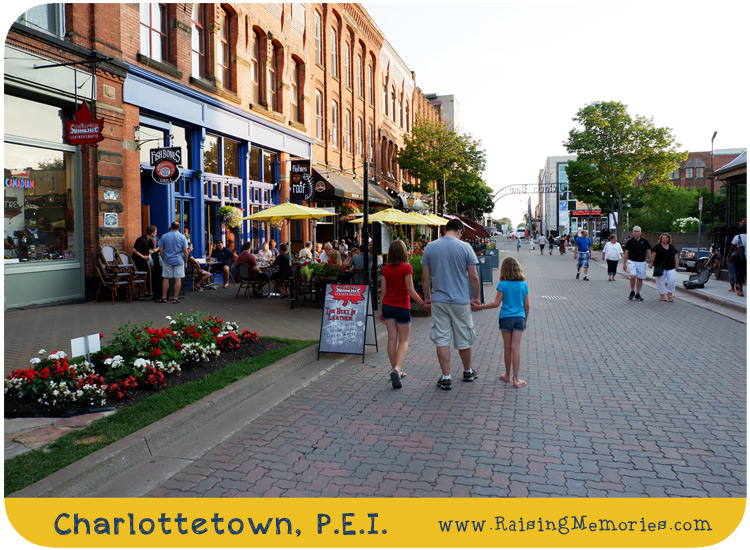 The morning we woke up in Charlottetown, we planned to go out for breakfast. We went to Casa Mia Café (which we could also see from our hotel room window!). Although we were there for breakfast, we could not leave without trying the Creme Brûlée Cheesecake I spotted on their menu! We will remember this restaurant as the place where we had dessert for breakfast. The cheesecake was so good that we picked up another piece, to-go, when we were back in Charlottetown that night!!

In the top, left photo you can see Ken's "Benny on the Run" (fried egg, grilled ham and Hollandaise sauce on a toasted English muffin) and in the bottom, right photo you can see my Stuffed French Toast (stuffed with maple cream cheese and topped with fried banana, maple syrup, whipped cream and bacon)! 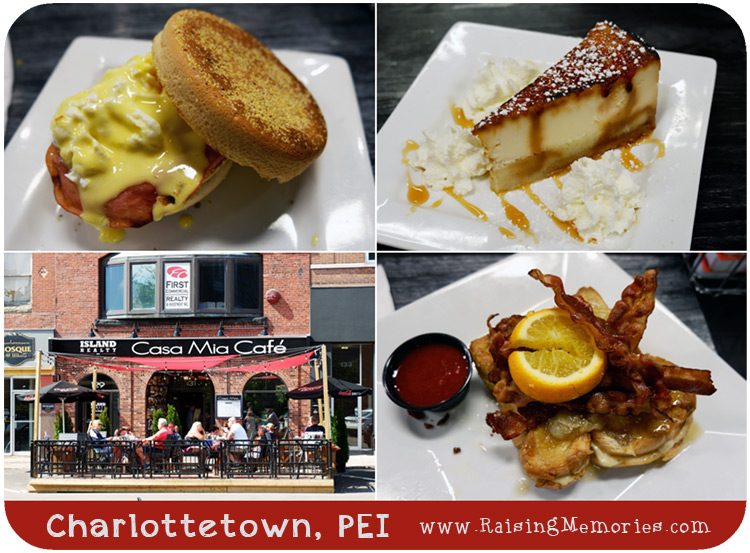 After breakfast we visited the Charlottetown Farmers' Market and I had an unexpected special moment when Ken spotted this Poffertjes booth. My Oma's health had been suffering prior to our trip, so my feelings about her and about Holland were close to the surface and when I saw the dutch food at this stand, I felt my eyes get a little moist, and we had to get ourselves a treat for nostalgia's sake! This will always be a special memory from this trip as I got the sad news of my Oma's death during our drive home on the last day of our trip. 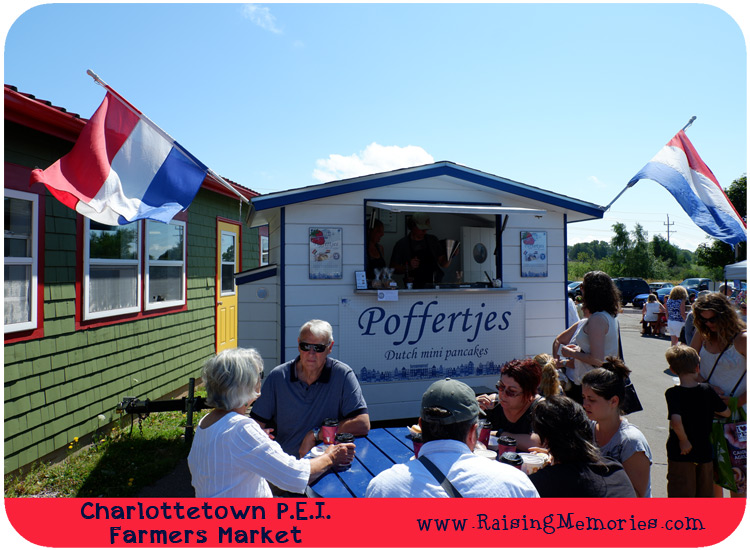 On our way out of Charlottetown that morning, we spotted this mural and had to hop out of the car and get a photo! We like how it looks like the lobster is trying to get the car. ;) 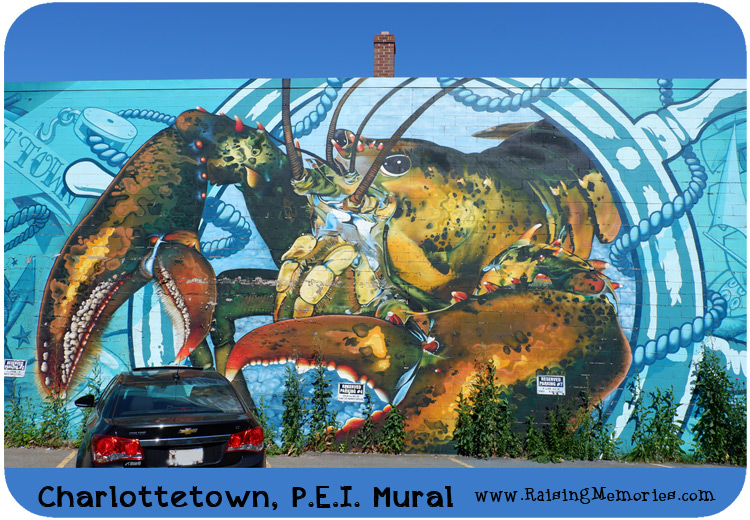 The last thing we did in Charlottetown (and certainly not the least) was to return to see the Anne of Green Gables musical. The musical included many of the stories from the book and stayed pretty true to the original story. The girls left singing the song "Ice Cream", and chattering about all of the funny parts from the show. I liked the way the musical portrayed Miss Stacey and our girls thought the Raspberry Cordial scene was hilarious! Some other great parts were Anne breaking her slate over Gilbert's head and Anne telling off Rachel Lynde! 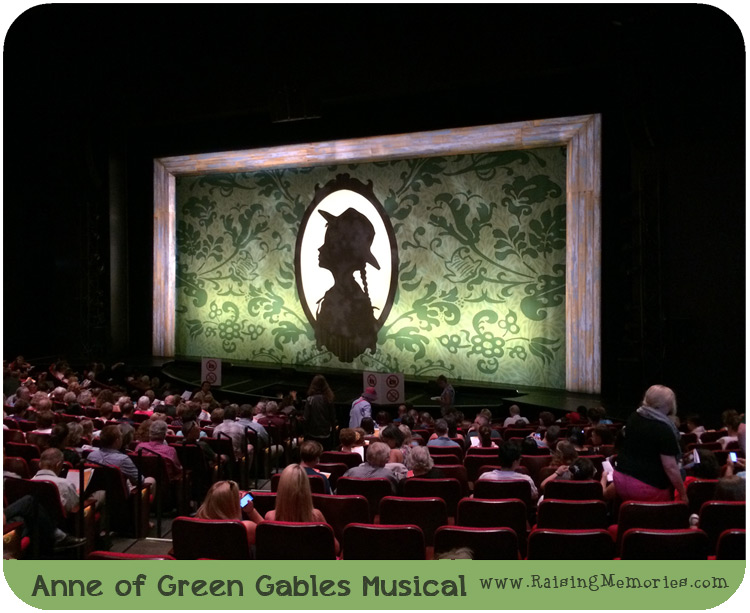 We had some wonderful experiences in Charlottetown, but that's only part of what we did on Prince Edward Island. Stay tuned to the blog for more about our discoveries in Cavendish!


Many thanks to Tourism P.E.I.  for their hospitality and assistance with planning our trip!