Monday Moments #9 (Back in Time)

Monday Moments #9 (Back in Time)

I was just looking back in my journal for something & found something cute that Talia did (this was November, 2008). Here's what I wrote:

As I was putting her back to sleep, I kissed her on the forehead & then I gave her a bunch more quick kisses around her face & said, "Oh! My lips got carried away!" She looked amused, so I did it again, & she said, "Did your lips get carried away again?" I said yes & she said, "Here, I'll give them back to you!" & pretended to pick them up off of her face & put them back! lol What a cutie! :)

Still looking through my journal, & found this:

This morning, Talia got into bed with Ken & I. She always tells us to stop sniffing (she sometimes says "snuffing") on her (she doesn't like being breathed on, but when you're laying facing one of us, it's bound to happen ;)

Yesterday I found something gross & brownish & hardened onto Talia's carpet in her room (ew- no idea what it was, but it wasn't poo). I asked her if she knew what it was & she looked at it & determined it was "poop". I asked her how it got there & she said, "Maybe an animal did it?" I said, "Really? How would an animal get in here?" Then she told me that it rang the doorbell and then came in and pooped! lol

Here's a picture from that time in her life: 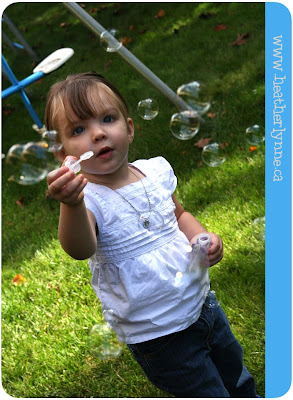